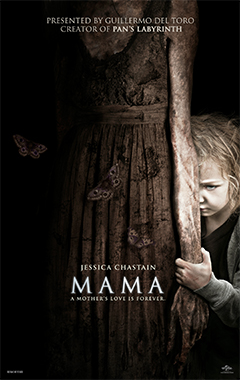 With another year comes another horror flick that Guillermo Del Toro chose to put his name on to present to us, and it’s sad to say, but Mama is yet another disappointment.

When their parents are killed, Lilly (Nelisse) and Victoria (Charpentier) end up in a cabin in the woods. When they’re found five years later, their uncle Lucas (Coster-Waldau) takes the girls home to raise with his girlfriend Annabel (Chastain), who is hesitant to take care of two girls and leave behind her life. It doesn’t take long for the couple to find themselves fighting for their lives and the lives of the girls when the tortured spirit that protected them in the woods wants them all to herself.

Rather than at least giving us a taste of atmosphere and then ruining it with a mid-movie creature reveal like Troy Nixey’s Don’t Be Afraid of the Dark did, Mama just doesn’t care about concealing who or what Mama really is. Call it a ghostly entity with a grudge or a woman who died and somehow became a forest nymph of sorts who can travel through wood and flies and has lots of cherries, it doesn’t really matter. Actually, not a lot really seems to matter to the writers.

They loosely weave together a story that could have reached some emotional levels if it hadn’t been packed full of lazy jump scares, plenty of loose ends, and really poor metaphors. If the symbolism of moths as death doesn’t hit you over the head within the first half of Mama, you can rest assured knowing that the rest of the film keeps it going will do the trick. Even Nikolaj Coster-Waldau, who plays twin brothers, is practically an expendable factor in the script as soon as he triggers the coming together of Annabel, the girls, and Mama.

Motherhood is a recurring theme throughout the films that Guillermo Del Toro presents, but unlike in El Orfanato, there’s little here to care for in terms of relationship between mother and child. There’s something about Jessica Chastain that screams mother, even with this punk-ish look she’s got going for her. Maybe it’s leftover love from The Tree of Life, or maybe it’s just some great acting from her in the midst of a messy movie. Heck, it’s probably both, and it works. The elder of the two girls, Megan Charpentier, was a treat to watch and worked well alongside Chastain.

What isn’t a treat to watch are the dream sequences that plague the movie more than the reality it establishes. The dream style they try to create is a joke that ends up being more humorous than anything, and there’s more than enough unintentional comedy throughout already. This isn’t to say there aren’t some lovely filmmaking moments like this one nice tracking shot of the girls through the house with absolute terror in their eyes, but considering the scene is almost shot for shot straight out of the solid short film the feature is based on, it’s no surprise.

Regardless of the perks of casting Chastain in the lead role, Mama disappoints through and through. It serves as just another reminder of how lazy horror has gotten, even when it’s trying to tell an emotionally gripping story.