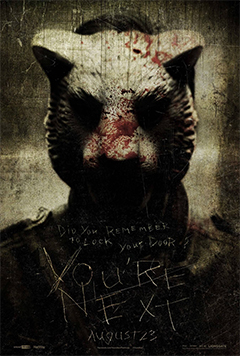 Much like Ti West was shot in the head with an arrow in this film’s trailer, the boring world of the home invasion movie has also been quickly murdered by Adam Wingard’s brilliant You’re Next.

Two long years after its premiere at TIFF, Wingard’s much-anticipated film is finally being unleashed on the world. With Adam Wingard and Simon Barrett delivering a mixed bunch of short films – their work in V/H/S/2 disappointing while Q from The ABCs of Death was stellar – some worry had started to seep in. Fear not though, the hype didn’t lie about what could easily be considered the best horror film of the year.

Sporting a collection of familiar faces like director-actors Amy Seimetz, Joe Swanberg, and the aforementioned Ti West, You’re Next tells of a family reunion interrupted by a group of masked killers invading their new home. When thrown into this situation, most react in the usual manner, but one of the guests Erin (Sharni Vinson), happens to have just the right training to fight back against the invaders.

Often enough, this genre will try as hard as it can to establish some semblance of safety before the horror strikes. Wingard and Barrett know that there’s no point in ever making one feel safe or like they’ve been violated. There’s a constant sense of tension, allowing for some smartly executed jump scares and death scenes, and throwing in a woman who knows how to survive in any situation to the dinner party guests makes it all the more unpredictable.

This isn’t to say that the narrative itself isn’t a little bit predictable, but that fact goes hand in hand with the film’s tongue-in-cheek nature. It knows the clichés, so it exploits and subverts them by making them downright hilarious to watch. Most of these characters are exactly the kind of ridiculous WASP’s you’d expect and watching them bicker in the face of disaster is such good way of poking fun at such privilege. Barrett’s dialogue is so quick-witted, ensuring that all of the blood is laced with comedy.

The way Adam Wingard uses the house to deliver both horror and comedy is impressive. It’s clear that You’re Next takes great inspiration from films of both genres, specifically in the way that events play out. A few scenes even leave you sitting there in a state of glee watching as these masked men fall into the same shenanigans that the robbers in Home Alone did. The humor always goes hand in hand with the violence, and the actors all clearly have a full grasp of exactly what Wingard and Barrett are doing.

Joe Swanberg and AJ Bowen in particular bounce their dialogue beautifully off each other, two brothers who never seem to stop hating each other. It would be easy to claim that Sharni Vinson is the stand out here, with the way she tears apart every single one of her action-laced sequences, and yet there’s something about the way all three of their characters interact at different points that makes them all incredibly valuable players.

Seeing the way every single one of the actors, writers, and directors of this budding horror community interact to create a film as smart as this one only serves to strengthen anticipation for all of their upcoming projects. You’re Next is already an immense step up from the work once seen in Wingard and company’s rather bland mumblecore A Horrible Way to Die, so hopes are now certainly high for the bunch.

It’s not always fun to watch home invasion films. Some like Funny Games are uncomfortable for a reason and others like The Strangers and The Purge are just plain dreadful. What Scream once did for the slasher, Adam Wingard and Simon Barrett have done for home invasion with You’re Next, an impressive and incredibly entertaining subversion of the subgenre.