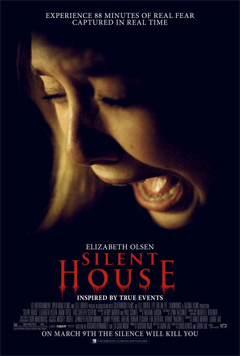 I’ve always been taught to never expect much from remakes, and I can’t say I expected much from Silent House. Luckily for me, Elizabeth Olsen’s acting and the atmosphere that this movie manages to create was enough to keep me watching.

Sarah, her father, and her uncle are in the process of renovating her family’s lakeside house to prep it for sale. It doesn’t take long for the strange noises to begin, and once the key to the only way out goes missing things begin to take a turn for the worse for Sarah.

The story, regardless of its relatively predictable nature, is not particularly bad. However, Laura Lau’s screenplay, based on the Uruguayan film La Casa Muda by Gustavo Hernandez, isn’t very good either. With what little dialogue there was, one would expect it to be well written at the very least, but it was mostly stale work. Some of it was even laughably bad from how stupid it sounded, especially when coming from an adult. While this bogs down the movie a bit, there is at least plenty to look forward to on the technical side.

The way its shot really adds more to the atmosphere and the story than the dialogue does because the darkness, tight framing, and the focus on Elizabeth Olsen’s face really works perfectly to add to the claustrophobic feeling that comes with the movie. The camerawork started off a bit obnoxiously, as if whoever was handling it really didn’t know how the fuck to hold it even remotely steady, but it progressively improved — with exception for when they were attempting to follow Elizabeth Olsen running.

In terms of the editing, a few of the cuts stood out more than others — much like in Hitchcock’s Rope — but it’s definitely a fine attempt at making it look like the film was shot in one full take. The use of lighting throughout was well done, and the involvement of minor surrealist aspects in the set design in certain scenes was impressive. I might even go as far as to say that if The Navidson Record (from Danielewski’s novel House of Leaves) were to ever take film form, Chris Kentis and Laura Lau might just do a good job.

As for Elizabeth Olsen, between her work in Martha Marcy May Marlene and this, there’s no denying this girl is a star. Few people know how to convey a feeling of true fear, but with some stunning facial work Olsen pulls it off. The close-ups of her face, which happen frequently in this movie, are wonderfully done, and just hearing her uneven breathing pumps up the tension. The rest of the cast, unfortunately, isn’t very good, except for maybe Julia Taylor Ross, who gave quite the curious performance in her little screen time.

Silent House is not the best horror movie, but it’s certainly not the worst either. It’s just an average flick with a great performance from Elizabeth Olsen and some interesting technical work. To me, it’s an experiment that paid off but could have been executed better. I’d say give it a shot, if only to stare at Olsen’s face for 88 minutes on the big screen.