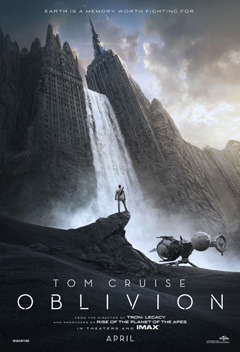 Who knew that the TRON: Legacy director had written a comic book? I didn’t. And very much like my experience with that movie, Oblivion, to me, was a full eye-roll experience of cheese… though, it didn’t start out that way. The movie setup is actually quite well done, and the post-apocalyptic Earth setting is quite a vision. However, this setup that works as a blessing is also its undoing.

Too much exposition, not much showing. Through a narrator that we will know later as Jack (Cruise as not Reacher) we learned that there was an alien invasion that later evolved into a (nuclear) war that the humans won. The aliens that remained on Earth became known as Scavengers, while humans were transported to a station known as Tet, that would eventually transport them to Titan (the Saturn moon).

While this is being prepared with the aid of extraction machines that are recollecting the Earth’s water resources, they need people stationed in the planet to oversee the operations and to fix any problems that might arise from the “scavs” resistance who have begun getting bolder. Despite his recurring dream, Jack always wakes up for his mission alongside his communication officer Victoria, aka. Vika (Riseborough).

Though Konsinski’s resemblance is only with that point in the film, they are both different in essence, as Oblivion isn’t emotionally bleak or draining, even if it tries to move us with Jack’s life. In fact, that’s the point where it becomes PURE cheese, especially with that ending — Dude! That ending! Coincidentally, it shares that with Jones’ Source Code, which also prominently features a love story. The difference with both is that while in Source Code we spend the whole movie doing one thing and developing the relationship between characters within that moment, in here we are told about our characters’ connections through flashbacks and dreams because there’s no better way to do it. It’s cheap and a total cop-out.

The only developed relationship that Jack gets is with Vika, which is basically done through the whole setup of the film because after the inciting incident, everyone that is later introduced gets to be shoved into Jack’s life exposing much more needed information. “This and that, Jack. This and that.” More talks about the past, and how Jack is different. Oblivion gets blown after the harsh realization from Vika. Kudos to Riseborough for her scenes.

Then… there’s Tom Cruise. I think I’ve kind of defended him for Jack Reacher, but I think the Tom Cruise crazy eyes is a disservice for the emotional impact that Oblivion was trying to achieve. They may have been extra crazy because when the film started shooting, his whole personal drama began. Or maybe there was some intention for the crazy eyes because of the character. Or maybe he can just play crazy eyes characters.

If you’re a complete visual person, go for it. Visually, Oblivion is totally Björk’s Jóga [MV] on steroids. Otherwise, a cable watch might be what you’re looking for.