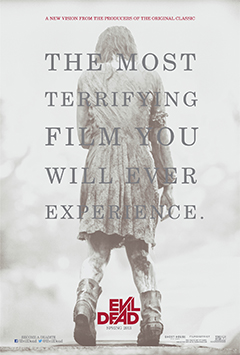 With copious amounts of blood raining down from the sky, Fede Alvarez brings us a new addition to the world that Sam Raimi created over thirty years ago, and boy, is it a great one.

Evil Dead introduces us to entirely new characters in the Evil Dead world, so that means no more chainsaw wielding Bruce Campbell as Ash Williams. That’s not a bad thing at all though, as it completely allows for the focus to completely shift off of the classic series outside of those subtle and blatant references thrown in for old fans and new.

The film takes a familiar path to set up the horror story, as a group of friends head over to an old family cabin in the woods. Mia, played by Suburgatory star Jane Levy, is attempting to quit her drug habit cold turkey once again, and her friends and brother are determined to keep her off the drugs.

It doesn’t take too long for the wonderful world of Evil Dead to kick in, as the group finds a basement full of dead cats and a little book all wrapped up in a garbage bag and barbed wire that clearly shouldn’t be touched. That book, as fans of the series all know, is the Necronomicon, which is essentially the reason everything goes to hell in a handbasket minutes after one of the boys reads a few key words from it.

From here on we find ourselves thrown into a film full of all sorts of horrifying images, from ligaments being torn off clean to possessions and even sexual assault by nature rather than human. It’s an incredibly uncomfortable series of events that only serve to lead us into one wildly riveting final act that actually showcases some great horror writing.

What Alvarez does best is bring forth exactly the sort of film that Raimi and Campbell set out to make decades ago: a horror film. The practical effects brought forth here alone are likely to be better than any horror film we’ll see in the next few years. With the original Evil Dead, regardless of its technical prowess and intention as a straight horror film, Raimi fell into camp territory more often than not. This was quickly remedied by retelling the story with Evil Dead II as a masterpiece mixture of comedy and horror, but a true horror piece was never brought forth.

While the possession of multiple characters could have easily fallen into a category that was more humorous than scary, like most horror flicks nowadays, Evil Dead keeps from working against itself. Levy, whose character has more twists and turns than practically any horror character in the last decade, is an absolute marvel to watch. Her first act work is about average, as the drug addicted girl is just as uninteresting as every other character, but once her character is completely given over to the demon, she gets a chance to show incredible range.

As always with any film that boasts the name of one from the past, people will yell “remakes are dumb” at the top of their lungs, and again, I return to yell back, “Shut up until you actually watch it and then tell me you didn’t fall in love.”  Alvarez shows us just how innovative one can be when bringing forth a new addition to an old, beloved series with Evil Dead and let’s be real: if Campbell and Raimi are willing to wholeheartedly support the man, every Evil Dead fan should be just as willing.