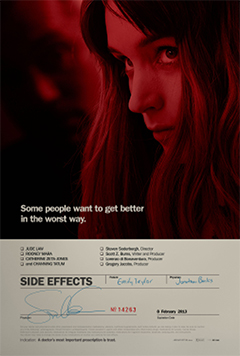 A sense of absolute hopelessness surrounds us from the very start of Steven Soderbergh’s Side Effects, as we’re introduced to Emily Taylor (Mara), a woman suffering from depression whose husband (Tatum) is about to get out of prison.

When she puts herself in harm’s way, psychiatrist Dr. Banks (Law) begins to care for her and puts her on prescription medication after consulting with her former psychiatrist Dr. Siebert (Zeta-Jones). It doesn’t take long for the medication to take a harrowing effect on all of their lives and for Emily to become a victim of circumstance and biology.

If there’s one thing to be thankful for, it’s that Side Effects doesn’t have anywhere near as many issues as its characters do, and the problems it does have are minor. The trailer reveals little of the world one jumps into while watching, which is a breath of fresh air when assuming that the film looked set on a one-way route to being a Basic Instinct rip off.

Nothing new can be said about Soderbergh’s style, lovely digital cinematography with that trademark yellow filter, but one technical feature that stands out is Thomas Newman’s score. Managing his cast as excellently as usual, Soderbergh gets some great work out of all four of his lead and major supporting actors. Rooney Mara stands above the rest, giving a performance reminiscent of Winona in Girl, Interrupted, and Jude Law falls nicely into his role and adapts adeptly as the role changes.

His role isn’t the only one that changes throughout the film, as Scott Z. Burns’ interesting little thriller of a screenplay slides comfortably into a traditional noir narrative. Once the first turning point kicks in less than halfway through, manipulation runs rampant. It’s got plenty of twists and turns that might surprise your average viewer, but the further into the last one gets, the easier it gets to predict the upcoming events.

While Contagion gave us a tiny taste of social commentary on the medical business through government-funded vaccine creation, Side Effects takes on a different enemy: the pharmaceutical industry. It’s not as strong and thorough as one might expect and loses steam due to the nature of the narrative, but it’s something to be thankful for. Burns is simple in his implications that the meds business is a corrupt one, willing to cut their losses with no remorse, without changing his story for the benefit of a message.

If this is the way Steven Soderbergh is closing his feature filmography, whether permanently or temporarily, we can all rest assured knowing that Side Effects makes for another great film in quite the diverse oeuvre.