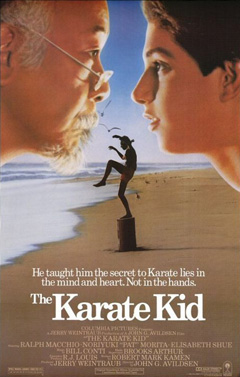 I was struggling to figure out what movies I was going to watch for the Time Machine Blogathon, when this came up on the TV, so I just couldn’t resist.

One of the movies that I grew up watching was The Karate Kid, you could see me there with my Karate Kid headband doing the crane kick. Even though I’m told it is apparently a date movie (???), it accompanied me during the first years of my life as I learned alongside Mr. Miyagi that Karate is not for fighting. And to wax on and wax off (or “encerar y pulir“).

Surprisingly, the movie holds itself pretty great with the passing of years. Sure, music and fashion are so 80s, and Ralph Macchio looks like a teen even though he was in his 20s — a strange feature that doesn’t seem to apply to 20-somethings any longer. Though I really like Elisabeth Shue in this and Macchio is the title character, what really makes The Karate Kid a movie to talk about is Mr. Miyagi. Rest in peace, Pat Morita.

For those of you that, for some reason, haven’t seen The Karate Kid (either this version or the last one with Will Smith’s kid), it’s about a guy called Daniel (Macchio) who has just moved with his single mom (Heller) to a new town. Being the new kid (with pretty bad luck and horrid timing), he crosses the wrong sort of people, a bunch of snotty, upper-class, Karate-chopping bullies led by Johnny (Zabka) who’s having issues dealing with Ali (Shue). Daniel, being an annoying normal teen — neither well-versed in the arts of over-talking like teens seem to be in movies nowadays nor suave like title characters are supposed to be — gets his butt handed to him. It’s devastating to see him being bullied (especially when you’re a kid), but you sort of see where some things may be coming from as you grow up, and that’s where Mr. Miyagi comes from.

Even though Daniel might be the “everyone’s out to get me” boy that then becomes the “I’m going to learn how to fight to kick these jerks’ butts” boy, Mr. Miyagi sits him down and teaches him what Karate is all about. Miyagi’s got some tough love for Daniel-san as he overworks him to Daniel’s discontent to make him learn. Kids would be probably outraged (I gotta make my Karate-chopping wannabe nephew watch this) to see how Miyagi tells Daniel to polish the floor, clean the cars and paint the whole house, to then have that moment of discovery that all those hard things he had to do were teaching him Karate. However, Mr. Miyagi isn’t just the token Asian guy who teaches the white kid stuff. No, Mr. Miyagi actually has some shades (hint: Japanese-American concentration camps passing mention [1]) that make him even more poignant as you grow older.

My only complaint in here is that the Karate fights (not seen through the eyes of the five-year-old me) are a little boring. I know some of the moves and the dynamics of the competition are pretty close to this, but that’s what is a little boring personally. It also doesn’t help much that Karate has been struggling a little with the flashiness of film with examples like Karate Girl trying to make Karate cool once again. Not to mention that Daniel-san kicking butt after two months of training is a little surreal, but I’m game.

Part of the Time Machine: Back to the 90’s Blogathon