Nausicaa of the Valley of the Wind 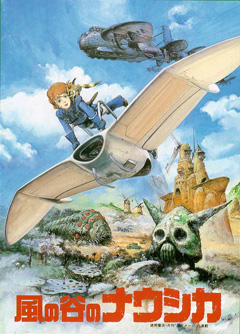 When I first watched Nausicaa of the Valley of the Wind, it felt like an okay film. But it turns out that it just gets better with time!

Unofficially a Studio Ghibli film, back when Hayao Miyazaki still worked for an animation magazine, he and pal-producer Isao Takahata tried to sell the story but were often shut down because no one was willing to release an animated film that wasn’t based on a popular manga.

So they did just that, a manga of the same name that then they later released as a film. The manga ended up running for 7 volumes and 8 years.

Nausicaa of the Valley of the Wind follows Nausicaa, an intrepid young woman living in an almost post-apocalyptic world, where humans have almost sucked the planet dry and nature has begun to fight back with the release of toxic spores.

Humans are living in small groups scattered in the small zones where the toxic spores haven’t yet sprung. One day, an airship from Tolmekia crashes in the Valley of the Wind grounds, who had been transporting a Giant Warrior, a lethal creature of the ancient war. The creature had been stolen from the Pejite people by the Tolmekian and their Princess Kushana to get rid of the toxic forests.

For those of us who were introduced to Studio Ghibli animation through Princess Mononoke, Nausicaa seems a LOT like it as both films’ environmental message is central to the plot, but being the first low-budget film in Miyazaki’s filmography, it certainly doesn’t have the technical achievement as Mononoke, with detailed but not as rich backgrounds and characters design. But that in itself is an unfair judgement on the film’s merits, after all the people involved were much more experienced as the years went on.

What the film has in its favor is the amount of action, there’s little silences throughout and we have Nausicaa constantly going after stuff and avoiding explosions and destruction. Its advantage in characters, of course, comes from the fact that Miyazaki had the first numbers of his manga to get an understanding of his characters in the film… and like in all Miyazaki’s adventures, no character is truly evil. And even the “evil looking” gross bugs, Ohms, creatures we couldn’t even fathom the idea that they’re there to actually save the forest.

Also, Nausicaa is a rocking princess as I’ve said in Why Little Girls Should Grow Up with Studio Ghibli. The film is centered in her, and she does most if not all the major achievements. She saves her people, and just as them, we discover that she is the chosen one — and she’s a girl!