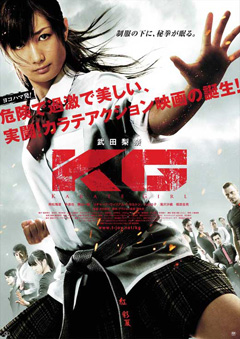 Let me be completely clear about Karate Girl — it’s one of the best action C movies ever made. It certainly is a huge improvement from the Kimura/Nishi 2009 Z movie High-Kick Girl!, also starring Rina Takeda.

I don’t know about you, but I wonder how long she’ll be able to stand all those kicks. After all, part of the “charm” in these films is that all the beat ups happen for real.

Karate Girl — not to be confused with any film in the Karate Kid franchise — tells the story of a family of an Okinawan karate master named Shojiro Kurenai. One day, a mysterious, quite hilariously evil, group enter Kurenai’s dojo to steal the Kurenai 200-year-old Black Belt, killing Shojiro, kidnapping the youngest Kurenai daughter, and leaving Ayaka as an orphan in the process.

Years have passed and Ayaka (Takeda), now a grown young woman working at the local cineplex, becomes the center of attention when she stops two bandits from trying to snatch the purse of someone at the theater. Alerted by the events, the mysterious group who destroyed her life begins targeting her once again.

Though Karate Girl, for the most part, avoids the biggest mistake in High-Kick Girl! — repeating each and EVERY karate kick once again in slow-motion — it is unable to avoid them completely. Still, the fighting sequences move faster when not having to watch them twice in a row. As a general rule, K.G. looks and feels like a more polished work — It can’t obviously be compared to Hong Kong action giants like Ip Man or whatever Donnie Yen can come up with — he is, after all, the biggest current action star worldwide [1]. Hong Kong productions are also mega-productions, and it’d be completely unfair to compare Kimura’s work with any of those.

Having said all that, it is bizarrely enthralling too see Takeda beating people up and getting beat up like this. With the notion that these fights are happening for real, K.G. makes you feel those kicks a lot more than if they were swiftly choreographed and shot a la Bourne. There’s also something really exhilarating to see these two girls — Takeda and Hina — flying while stepping on people’s chests.

There are no wires; there’s no padding — at least not in the actual shooting. Seriously, safety conditions are also improved from their work on High-Kick Girl! — which reported a few injured stuntmen/actors. The acting is a bit funny, but fits the type of movie. Takeda is a black-belt in Karate, which obviously explains her kick-assness in the movie, and has improved her acting. I think she’s got a Hong Kong sci-fi action film in production titled Future Fighters, which I would probably be willing to check out.

I gotta admit that Ayaka choosing to fight her final battle in school uniform is pretty hilarious. I was imagining a line that went something like, “Neechan, why are you dressed like that?” Ayaka’s apathy towards her sister’s kidnapping also bothered me. And Ayaka’s stepmother? Was that her stepmother? I thought that was her friend or something.

I would not recommend this one to everyone. It’s a pretty niche film, you have to admit. But if you get the chance to watch it, do it for fun… and avoid the crappy subtitles.