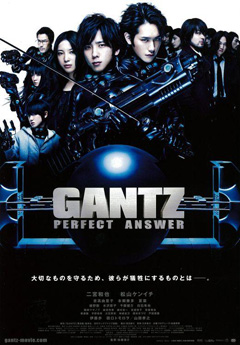 Gantz: Perfect Answer is the second live action installment of the Gantz series, set just a few months after what just happened in Gantz. Having said that, there isn’t much of an explanation of what’s going on — except for a brief recap of the first movie — so I strongly suggest you don’t watch this on your first go.

With the death of their Gantz “colleagues” and the introduction of new participants, Kei Kurono (Ninomiya) promised to gather the hundred points necessary to be able to revive their dead friends and later be freed from the mysterious black sphere’s grasp. However, the plot thickens when famous idol Erika Ayukawa (Ito) wakes up from a dream all disheveled, holding a tiny black sphere that tells her the name of her next target.

The plot thickens even further with the involvement of detective Masamitsu Shigeta (Yamada), who has been following the bizarre destructive happenings and is sure something bigger than life might be at stake. Then… there’re aliens or something, also in search of the mysterious black sphere… key for the destruction of Gantz. In short, Gantz: Perfect Answer is far from being “the perfect answer,” instead being the source of many more questions than what we started with.

In my initial assessment of the movie, I compared it to Casshern — it feels like they wanted to show that the black sphere lives on the destruction that it sets with the killing of monsters/aliens, and that human beings participate in this destruction for their survival. In the end, however, these monsters we’re killing begin fighting back for their own survival. The problem with the execution, though, is that Gou Ayano’s fighting monster/alien character never really becomes more. The fighting with the swords is really cool-looking, I don’t think I’ve seen as enjoyable katana fighting since Kill Bill, but it all feels pointless.

The action and look of the movies are of high quality generally — despite the questionable suits, which I have mentioned before. Overall, it’s a really decent-looking blockbuster. No cheap props or tacky editing, at least not much that would distract you from all the questions running through your head.

Though Gantz: Perfect Answer tries to carry more meat than its predecessor with layers of characters to explain, it becomes so entangled that the movie doesn’t know how to get out of its own mess. In the end, whatever intrigue you could get from Ayumi Ito’s mystery or the emotional attachment to Kurono or Tae Kojima (Yoshitaka) is lost. Even the final reveal of what happens to Gantz after Gantz is over doesn’t feel like anything worth fussing over.

One extra quarter of a star because I enjoyed Gou Ayano’s acting, and I also liked the first half of Ito’s performance.