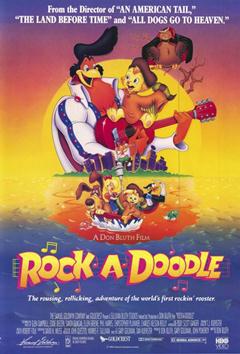 Following in the same footsteps and animation style as it’s predecesor’s The Land Before Time, All Dogs Go to Heaven, and An American Tale, Rock-A-Doodle took a stand against the animation conglomerate, Disney. With it’s catchy tunes, and slap-stick comedy, it’s an adventure that’s as kid friendly as it is entertaining.

Rock-A-Doodle opens on a small animated farm telling the story about Chanticleer – the farms’ rooster that they all believe helps wake the sun each day with his crow. When he is unable to crow, they farm shuns him for being a “fake” and he leaves, embarrassed and depressed. The animation suddenly opens to a small human boy being read a story in the midst of a tumultuous storm. The child believes that the storm is caused by Chanticleer not crowing the sun awake and the evil owl, Duke breaks into the house to turn him into an animated cat. Edmund, now in cat form, goes on his own adventure to discover the whereabouts of Chanticleer and restore peace to the farm.

Re-watching this story, nearly 20 years after I used to watch it constantly as a child, sure brought back a lot of childhood memories for me. I remember having a crush on the animated bird. While, I’m not sure what that says about my character, it does have to say something to the quality of the character development, if children can get that easily attached to them. Rock-A-Doodle is definitely a child’s movie, however. The slap-stick comedy, and simple themes are easily followed by the youngest of viewers, and there is very little to the film that is adult friendly, compared to modern day animated feature films. In all, the best part of this film for adults, is watching their kids laugh and enjoy this animated classic.