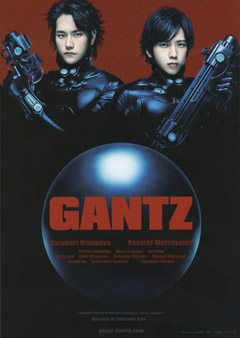 Curiosity killed the cat. And oh, was I really curious about this movie because it was so popular online. It’s based on the manga by Hiroya Oku, and I really don’t follow manga fandom, so I had literally no idea what this whole Gantz thing was about. The result was a mix bag of surprise and confusion that carried onto the following installation of Gantz: Perfect Answer. And before we can judge them, no — they didn’t do the sequel because they made money with Gantz, the story arc seems to suggest it was all intended to be a two-part story.

As a result, however, Gantz feels like just the introduction of the story. It sets the base firmly, but it leaves you with a wash-out aftertaste once the movie is over. Not like fans had to wait much for the second part to be in theaters — which happened only three months later — but I would still suggest you watch one right after the other if you have intentions of dipping your toes into the universe.

The movie begins following Kei Kurono (Ninomiya), a college student who’s having difficulty finding a job because he’s insecure and wants to probably blend in as much as is possible. He’s on his way to a job interview when he runs into Masaru Kato (Matsuyama), an old schoolmate whom he hadn’t seen since they were kids. Though Kurono spots Kato, he pretends he doesn’t and he intends to ignore him when Kato asks for his aid helping a drunken man who has fallen on the train tracks. In a bizarre turn of events, they end up in a mysterious room with a bunch of strangers — as baffled as they are — only accompanied by an enigmatic black sphere which they only refer to as “Gantz.”

What happens in Gantz, however, doesn’t seem to stay in Gantz. The group — Kurono, Kato, alongside Kishimoto (Natsuna), Suzuki (Taguchi), and Nishi (Hongo) — are thrown into a not-virtual-reality type of video game in which they have to capture targets to receive points. Soon they find out their lives are at stake, and things get serious.

I actually found the movie quite confusing by the end, even though I was game for about half the film, which made it seem like a mind-bending mix of Battle Royale meets Casshern… with a dash of X-Men for those ridiculous power suits. The first target — the onion-loving one — had clear horror elements and the blood splashing seemed to suggest so. It was scary and exciting, with the dash of weepy drama that I kind of enjoyed in Casshern. However, like I said, this first part of Gantz felt incomplete, never taking me to the level in which I could feel elated. There’s also a sequence with Ninomiya testing the power suit that was much too reminiscent of Spider-Man, and shows how corny superheroes can actually be.

It definitely had decent acting, despite some terrible dialogue sprinkled here and there, but the fight sequences more than make up for some of those action movie cheese staples. The idea of what “Gantz” actually is is also intriguing, but I didn’t think it paid off in Perfect Answer… then again, you’ll have to wait for my Perfect Answer review to know about that.

Also, Ayumi Ito makes an unusual “cameo” at the beginning of the film, prepping for her role in the following installment.