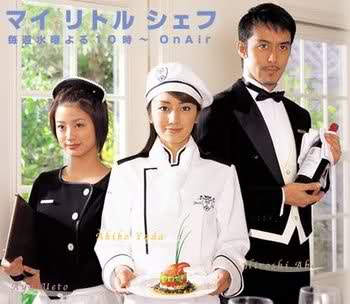 Seri Kamosawa (Akiko Yada) seems to have a content life, using her cooking skills to prepare special diet cuisine at a senior citizens’ home in the country. Yet when her late father’s former restaurant partner Kensaku Tachibana (Hiroshi Abe) asks her to become head chef at his new restaurant, will Seri be willing to undertake the challenge?

Despite the plain dialogue and Japanese TV production conventions, My Little Chef is a fantastic show that is sappy in all the right ways. It encourages engaging one’s creativity, living happy lives, and eating good food! It even fulfills both the requirements and intent of the Bechdel test. Seri, her sister Nazuna (Aya Ueto), and other recurring female characters never seem to have a complete conversation about romantic prospects. Conversations about their male boss or coworkers end up relating to the business of running the restaurant. They talk more about food and family and jobs and life goals. The show accepts whatever path makes a female character feel complete — career, children, or both.

My Little Chef has a quiet and funny charm in its details. The show begins with a guy cleaning a toilet, of all things (possibly a joke about where the food will end up). Characters later comment on a moment that happens every episode — when the camera zooms up to Seri, the lights behind her brighten, and she tilts her head before opening her eyes wide at the birth of a new gourmet idea. Dishes are labeled on the screen, and characters list ingredients in the dialogue. This show is basically a reassuring procedural drama, in which food can solve problems and change lives.

While the resolution of one-episode problems might be a little too tidy, series-long arcs are handled in a more honest and realistic manner. With characters to cheer for, and amazing food on screen, My Little Chef is prime comfort drama.

Part of the YAMYUM Food Blogathon.