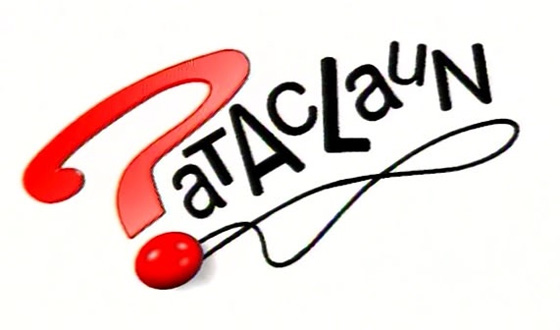 Based on the theater style of Claun (clown), where performers would do sketches of dark comedy dressed in multicolored attire and sporting clown noses, this Peruvian series of the late 90s broke the mold of Peruvian television with its mix of comedy and pop culture references that has stayed in the public’s subconscious ever since, launching the careers of Carlos Alcántara, Johanna San Miguel, Gonzalo Torres, and Carlos Carlín, who have kept on working on television.

Pataclaun starts from the premise of a newlywed couple, Wendy (Wendy Ramos) and Machín (Alcántara), whose relationship — as the intro points out — evolved from meeting to “dancing a bolero,” cuddling and getting married in a month, and buying a house that was inhabited by three ghosts: Queca (San Miguel), Tony (Carlín), and Gonzalete (Torres). From the first episode, Wendy Está Embarazada (Wendy Is Pregnant), you can feel what the show is going to be like. Colorful cardboard or polystyrene props make up what the set will be like for the next two years, and the humor loaded with references to El Chapulín Colorado (“el Chapulín ha engordado” — the Chapulín has gotten fat), the iconic Bebeto goal celebration [1], Bruce Lee’s fighting, Hadoukens from old school Street Fighter [1], He-Man’s Spanish Latino quote “Por el poder de Grayskull” [1], Illya Kuryaki and the Valderramas’ references, Karate Kid, Celia Cruz’ Burundanga [1], and Natusha’s Tú la Tienes que Pagar [MV]. And that’s ONLY in the first episode.

The show even breaks the fourth wall continuously, not only talking (or showing) its audience (and filming crew) to the studio, but also talking to its audience at home, creating a bond with us as if these characters were indeed part of our lives. We learned their lingo, their phrases, the way they moved, and they have stayed with us throughout the years with their catch phrases like Alcántara’s “Are, Ajo, Erda.” Pataclaun was also an exaggerated mirror of Lima society — Machín is a misogynistic man who often belittles his wife and hits her for very comedic effect, but instead of playing the gender empowerment game of who’s better than the other, Wendy (alongside Queca) amp the game up with their own name-calling and hitting. Machín may be misogynistic, he may insult everyone and lack intelligence, but he has his moments in the sun when he shows his love for his wife and daughter, Monchi (Monserrat Brugué), who exploded into Peruvian pop culture with her very own catch phrase “Horrible Oye!” (Hey, it’s awful!), used in vaccination campaigns during those years.

And while Wendy may seem like a one-neuron naive woman who loves to be at home, and is often taken advantage of  by the vain (and quite perverted) ghost Tony, she proves to have her own empowering moments where she stands up for herself, showing she’s capable of achieving anything — from splitting an atom, knowing the length of the longest river in the world, and having a hit song.

The companion ghosts are no better ex-human-beings. Tony is a vain man looking to bed Wendy any chance he gets while often being the cause of many episodes’ troubles. Queca is a ghost from outside the capital that wishes and acts as if she were a white foreigner but deep inside is the epitome of a Peruvian, and though Gonzalete may be a priest ghost who has his moments of moral conduct, he shows a side of his libidinous desire to great laughs. In short, these exaggerations are pretty darn real, and that’s what made these characters stick around. It’s not weird at all to hear people still referencing them when seeing the actors in their gigs nowadays, because after so many years we still get to see reruns of Pataclaun. It doesn’t matter how many times you’ve seen one of their episodes, there’s still room for more laughter.

In a sense, yes, there’s a lot that can be compared to Chespirito’s El Chavo del 8, in that both shows painted a social parody with brushstrokes that showed some of the darker sides (El Chavo not having anything to eat for breakfast, or Machín trying to get rid of her daughter for being born a girl) of  our lives in a way that we’re allowed to watch and re-watch these, while the shows keep getting better and better. Pataclaun, however, seems a little more grown-up (there’s a lot of sex jokes), more localized in that the humor and language seem to be specific to Lima. But maybe I’m wrong.