YAM Magazine Time Machine Blogathon: Back to the 90’s

The YAM Magazine team has a new feature out! The Time Machine Blogathon! The idea of it is fairly simple: We’ve set a year/era (preferably when we’ve already been born) and we’ll revisit movies, TV shows, books and music that we used to listen to.

BUT I ONLY WATCHED/LISTENED TO WHAT MY PARENTS DID!?!?! SO I BASICALLY GREW UP WATCHING AND LISTENING TO THE CLASSICS, CAN I STILL JOIN?

Of course! That’s the beauty of it. You can review anything you watched to the set date, but remember to share memories of it (or we’ll know you just cheated!!).

For our first Time Machine trip, the staff has chosen the 90s! 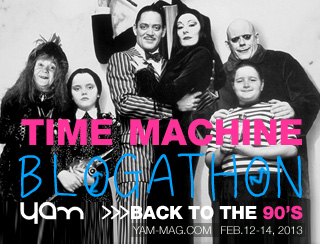 So anything you’ve watched, listened to, read during the 90’s is open! We don’t care if you spent the summer of ’95 listening to the Beatles, or if you grew up during the 90s watching Shirley Temple being cute. It’s all the same to us if you sang along to Britney Spears’ Baby One More Time after you sang to Nirvana’s Smells Like Teen Spirit, or if you told anyone you had Metallica in your CD player, but you were really listening to Celine Dion singing the Titanic love song.

If you watched the Gremlins before you became a fan of Jurassic Park, or were uncomfortable after seeing Edward Scissorhands cutting Kathy Baker’s hair while freaking out about the aliens on The X-Files. We want to know if you squeaked in The One with Ross’s Wedding or if you spent your weeks wondering whether Joey would sleep with Dawson.

Set your alarms for February 12th to February 14th, we’re going back in time.

Simply add one of the graphics below and link back to this post with a pingback or leave your own link in the comment section. Or simply join us on our Facebook event, or with the hashtag #YAM90s on Twitter or Weibo.

Here are the banners: