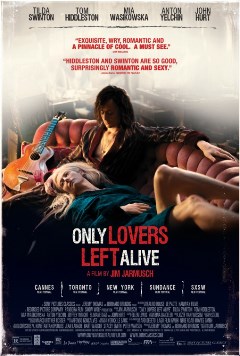 As a bloody love story, Only Lovers Left Alive leaves you thirsty for more and more.

Adam (Hiddleston) and Eve (Swinton) are a vampire couple. As they have been together for centuries, they take some time apart from each other every now and then. During one of these “breaks”, Adam decides that he’s had enough and wants to kill himself. Eve travels from Tangiers (where she was living) to Detroit, where he is, to prevent this from happening. Ava (Wasikowska) decides to drop by as well, unleashing hell on this particular “Garden of Eden,” bringing trouble for Adam and Eve.

He is an incurable nostalgic, wrapped up in memories of a glorious past while proclaiming that zombies (humans) are ruining everything. She lives in the present, enjoying everything, nourishing her soul just by being alive. Love is what brings them together, saves them, makes them feel alive and makes them whole.

Both Hiddleston and Swinton are incredible on screen. Their chemistry carries the entire film, while engaging in endearing and eloquent conversations about everything and nothing in particular. They talk and talk and talk and talk. Sometimes in bed, sometimes on a couch, while driving… and it’s not boring at all! It is actually mesmerizing and cool, like them. Tilda’s character is vibrant and colorful, and it’s a welcomed contrast with Tom’s gloomy Adam. They’re light and darkness, together, coexisting in harmony.

Adam is a melancholic, reclusive post-rock musician, so the soundtrack has to be amazing. And guess what? IT IS. The music is eclectic, sensual and a bit animalistic. It never disappoints. SQÜRL (Jarmusch’s band), Jozef Van Wissem and Yasmin Hamdan are some of the talented people behind the masterful soundtrack. I also enjoyed the predatory look throughout the film. From the actual vampires to the buildings and surroundings, the sense of danger never went away. Their hair was wild, their clothes were strange and beautiful. Everything looked and felt dangerous, appealing and in some way sinful around these blood-thirsty creatures of the night.

What I didn’t really like was Ava’s story, which seemed forced into the plot just for the sake of creating another conflict apart from Adam’s existential crisis.I could have watched Adam and Eve talking, dancing, and drinking blood without having Ava’s “interference” in the story.

This film is exquisite, classy, funny and witty. From beginning to end, you feel like you’ve been invited to a visually compelling cinematic feast. Only Lovers Left Alive flows effortlessly through our bloodstream into our hearts.