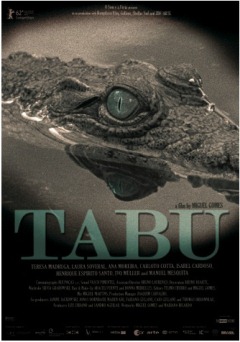 Tabu opens with a mock-vintage vignette, tracking a European explorer like the creatures stalked by classic nature documentaries. Despite the official intentions he states, he is truly fleeing the memory of his dead wife. Then his wife appears.

2011 is soon to end in Lisbon, and middle-aged Pilar (Madruga) is watching that short film about the explorer. Pilar never denies a request for help, whether through working for a human rights organization, hosting a  foreign visitor, or checking on her elderly neighbor Aurora (Several). Aurora’s mind is unsettled in senility, alternately cursing and crying out for her faraway daughter or her caretaker Santa (Cardoso). Santa, an immigrant from Cape Verde, lives with Aurora’s lightning flashes of cruelty and racism and quietly keeps to her tasks for job security.

In the 1960s, within a Portuguese colony in Africa, young Aurora (Moreira) resides by the fictional mountain Tabu. A prolific big game hunter when she meets her husband (Müller), Aurora grows uncomfortable with an increasingly housebound life. Her pet crocodile escapes into the house of Gianluca Ventura (Cotta), with whom she initiates a doomed affair.

Rui Poças’ black-and-white cinematography swaps 35 mm to 16 mm for the two distinct halves of this film. Part I and Part II are, respectively, Paradise Lost and Paradise, reversing the title order of the halves of F.W. Murnau’s Tabu: A Story of the South Seas. All dialogue, except for the older Gianluca’s (Santo) narration, is muted in the Mozambique-filmed second half, a technique evoking silent cinema. Tabu binds skewed nostalgia and stark modern misery, despairing loneliness and fractured relationships. The first fifteen to twenty minutes can test the impatient, with long takes and clinical tone. Yet the film settles into a captivating mode, with memories and media filtered through flawed perspectives.

Who is silenced in this film about storytelling? Under the ripples of pop song-soaked melodrama, the photo-essay quality of some compositions contrasts with what is said, forcing the viewer to think beyond the frame. The privileged white characters more or less accept colonial exploitation as status quo, but ignoring the concerns of others doesn’t stop one’s actions from affecting others. Gianluca might dismiss the calls for whites to take up arms against Africans, but he inadvertently sets up events disastrous for a native village. Racist violence — mentioned, but never depicted — and hatred stem from delusion or lies. The African characters rarely share their opinion, because speaking out risks their lives and livelihoods. Thus, we only see the periphery of their narratives. For instance, in scant scenes outside her caretaker duties, Santa learns how to read and write through novels like Robinson Crusoe. She extracts skills and knowledge from a book about a white person who extracts skills and knowledge from a nonwhite person.

Characters look to other lands and eras in often futile or diverted searches for purpose and fulfillment. Youth remains at a distance, and even the visitor Pilar offered to host prefers to stay with younger friends. The film’s soundtrack jumps through time and reality, with Gianluca’s band “performing” The Ramones’ cover of The Ronettes’ Baby I Love You in a scene occurring twenty years before that cover was released. Lonely Wine by Mickey Gilley joins the Phil Spector-heavy soundtrack, and many viewers may cry the second time Be My Baby plays.

If you have the chance, watch Tabu in a theater that is projecting the movie on film. Sensual and cerebral, it sneaks in flickers of humor and irony amidst the saudade. Tabu celebrates and criticizes views of the past, becoming, like its subject, an experience complicated to grasp, a ghost shimmering on screen.