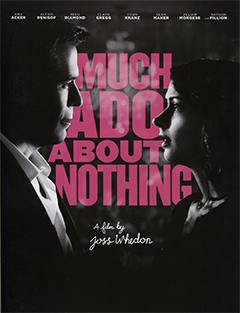 There’s something about Shakespeare that makes almost every person who sat through a high school English class groan in agony as they’re subject+ed to yet another retelling of the same plays they once read. Be it a modern reimagining like Baz Luhrmann’s Romeo & Juliet or the stuffy theatre actors who would gasp at the thought of anyone untrained touching the bard’s precious words, it’s a tiresome cycle of the same old thing.

Yet, somehow in the days after shooting what is arguably one of the best superhero films around (The Avengers), a man by the name of Joss Whedon has brought new life to these dusty old words. By inviting his friends, and the entire world, straight into his home to put on an intimate and inspired production of Much Ado About Nothing, Whedon has created one of the most delightful Shakespeare films ever.

Those who have never read Shakespeare’s Much Ado will find themselves in the midst of two pairs of lovers – Benedick (Denisof) and Beatrice (Acker), & Claudio (Kranz) and Hero (Morgese). Where Claudio and Hero are young and naive in their romance, Benedick and Beatrice are engaged in a “merry war” of wit and frustration, never wanting to fall in love. Both parties find themselves subject to the fancies of those that surround them, with the villainous Don John (Maher) pushing Claudio and Hero apart as Leonato (Gregg) brings Benedick and Beatrice together.

The playful atmosphere of Shakespeare’s work is ever present and yet every near-tragedy is emphasized to ensure that the tale is told properly. Joss Whedon appreciates each of these characters for all their flaws and foolishness and his actors do just the same. The deception embedded in Claudio’s tale allows Fran Kranz more of a chance to be a bumbling fool while Sean Maher shines in his villainous ways. There’s a dark humor in the way that Kranz stands in the pool with a cocktail glass and scuba gear as his enemies, including Maher, surround him like sharks.

Much Ado’s darker moments are also accompanied by a delicious sexuality that oozes from every one of pores, which makes perfect sense as it is a sex comedy in its true nature. Certain long moments of silence only serve to enhance the film’s intimacy, as the black and white photography shows us the atmosphere that Whedon’s luxurious house can create when no one is speaking. As if the film’s sleek look wasn’t enough, he, with the help of Maurissa Tancharoen and Jed Whedon, composes a modern classical score to complement each scene exquisitely.

For all the sexuality and drama that comes along with this comedy, nothing is as important as the humor that every single familiar face from Joss Whedon’s past brings forth. Nathan Fillion’s one-liners and Clark Gregg’s expressions bring nothing but laughs to the already amusing film, but it is the main couple that steals the show right out from under everyone’s feet, just as Whedon intended by often focusing his lens – and an abundance of long takes – of them.

Amy Acker’s Beatrice is a romantic comedy star for the modern woman, just as Denisof reflects the playboy charm so many men aspire to have. Neither one has any interest in settling down for romance and that’s just how it should be. Both actors hit every beat that Shakespeare provides without looking like they’re trying hard to do it justice, delivering their impassioned monologues with the same care that they embrace the physical comedy of falling down stairs or into bushes.

Featuring all the style, intimacy, tragedy, humor, and frequent collaborators that his projects typically do, Much Ado About Nothing is frankly nothing new or surprising for Joss Whedon. Even so, all of this familiarity is exactly what Shakespeare’s writing is in desperate need of and what makes Much Ado About Nothing such a brilliant production of a classic play.