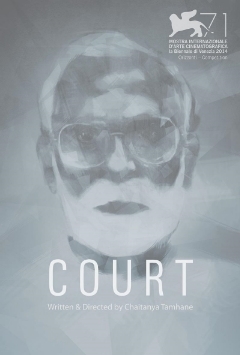 The intimate yet unobtrusive and “objective” visual approach Frederick Wiseman is known for is commonly seen in both  documentary and narrative cinema these days, but it is rarely applied with as much discipline and restraint as it is by a 27-year-old Chaitanya Tamhane in his remarkable debut feature, Court. The film employs the context of a trial to explore a number of pressing sociopolitical concerns facing Indian society today. Given the subject matter, Tamhane’s tableau aesthetic feels entirely appropriate; like Wiseman, it allows him to be as unbiased as possible while maintaining a quiet, observational immersion into the film’s very real and complex milieu.

Tamhane establishes a sense of verisimilitude early on as we witness, in a long, static master shot, an elderly political activist and protest singer (Sathidar) being arrested in a calm, almost indifferent manner after what appears to be a live street performance. This turns out to be a politically motivated situation he has been through before on numerous occasions and will again during the course of the film. The charge against him this time is almost Kafkaesque in its absurdity—he’s accused of inciting a sewage worker, from his own long-oppressed Dalit community, to commit suicide with his incendiary lyrics—and Tamhane, who also wrote the film, tackles it with the kind of seriousness and depth that itself borders on the ironic. This wry, intelligent effort is as much of an anti-courtroom drama as Corneliu Porumboiu’s Police, Adjective (2009) is an anti-policier.

The film methodically branches out to depict the lives of those who will shape the ailing defendant’s remaining future. By doing so, Tamhane suggests that if the courtroom is a microcosm of society at large, then what affects the people who interpret the often bizarre and arcane laws of the judicial system holds equal importance. The young, upper-class, well-meaning defense lawyer (Gomber) is the epitome of a modernizing India, almost bewildered by the age-old customs and values that still hold sway. And that’s thanks to people in position of power such as the trial judge (Joshi), who is either far too enmeshed in such ethics or has become far too jaded to try to change the status quo, and he knows how to use the law as a political and ideological weapon.

The likely underpaid public persecutor (Kulkarni), on the other hand, is a lower middle-class, middle-aged woman whose day doesn’t end with the courtroom proceedings. It’s easy to see why, to her, this is only a job and she’s smart enough to know that the best way to execute it is to go by the manual she’s supposed to follow. “Give him 20 years and get it over it,” she frustratingly states to a colleague regarding the underprivileged defendant once the case starts to drag through the court system and appeals process. Her family once visits a theatre to witness a popular anti-immigrant comedy (whose romantic scenario echoes that of Vishal Bhardwaj’s 2009 Kaminey), which ends with a loud, disconcertingly expressive assertion of Maharashtrian identity.

Yet, it is these frailties and complexities that allow Tamhane to humanize his characters, many of whom more or less play themselves. “Although the film is set in very peculiar sub-cultures of Mumbai, the attempt is to explore the invisible fabric of a collective,” Tamhane has said. “The characters are constantly acting upon the invisible triggers of caste and class politics, patriarchy, and feudalism. The challenge for me was to lend dignity and humanity to these people, despite their flaws.” That is one of his many accomplishments in this auspicious debut, quite possibly the finest, most confident one I’ve seen since Lucrecia Martel’s La Ciénaga (2001).