Qissa: The Tale of a Lonely Ghost 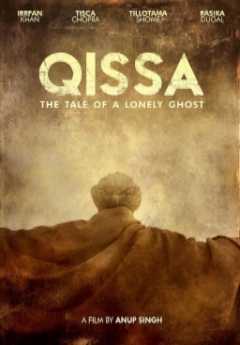 Besides the Japanese Asano Tadanobu, perhaps no other actor of his generation is as naturally adept at controlling a film with his silences as Irrfan Khan. He possesses a wonderfully unique ability to pace any given scene according to his own deliberate gestural vocabulary and method of delivery. Although Khan has been working since the late eighties, he was prominently exposed to the international audiences for the first time in Asif Kapadia’s 2001 The Warrior, where he simply allowed his eyes to do the talking for him. I’ve witnessed something similar in a number of films he has appeared in since then. Most recently, after watching him play a taciturn middle-aged widower in Ritesh Batra’s The Lunchbox, and a mysterious ghost-like figure in Vishal Bhardwaj’s Haider; it’s not surprising to find Khan in his element once again in the striking supernatural folktale, Qissa: The Tale of a Lonely Ghost.

He essays a fractured and delusional individual who, having already fathered three daughters, so desperately wants a son that when the fourth child also turns out to be a daughter he decides to hide the kid’s real identity and raises her as a son. Khan’s quiet, commanding presence here makes his outbursts seem that much more vicious: in the film’s most harrowing scene, he resorts to physical violence upon learning that his daughters endangered the life of his much-cherished “son.”

Khan’s character is a Sikh who is uprooted from his village in Pakistani Punjab due to ethnic cleansing that accompanied the partition of British India in 1947. He builds a new life for himself and his family in the Indian part of the region but does not feel tied to the land. Directed by the Tanzanian-born Anup Singh, the film requires a certain amount of suspension of disbelief early on in the proceedings, but that pays off magnificently when, like an Apichatpong Weerasethakul concoction, it quietly shifts into magical-realist territory. Singh’s subtly stylized mise-en-scène certainly helps in this regard: his deployment of light, color and space appropriately lends a haunting, fantastical quality to the work.

Although the film’s overarching movement roots its tragedy in the trauma of partition, it is more convincing as an allegorical critique of the kind of patriarchal values that have made female feticide and infanticide a matter of grave concern in India. Given the spate of recent, much publicized cases of women’s rights violations in the country, this timeless tale could not be more timely.