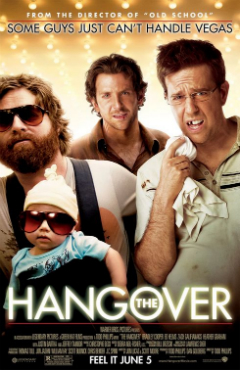 Two years ago, nobody would have thought that a film involving a hangover could turn out to be a critical and commercial success. But director Todd Phillips (Old School) managed to accomplish that.

The Hangover is an American comedy that is about… well, the film’s title speaks for itself. It follows Doug (Bartha) and his best friends Phil (Cooper), Stu (Helms) and Alan (Galifianakis) traveling to Las Vegas for Doug’s bachelor party. They get a villa at Ceasars Palace. They toast to a night that they’ll never forget and start to drink.

So far, it sounds like something you would hear about in real life. But once they wake up, Doug is missing and the three groomsmen cannot remember a single thing from the previous night.

To illustrate how wasted they were, they encounter a baby in their suite’s closet, Stu is missing one tooth, a chicken is wandering around the suite, a tiger is in the bathroom and to top it off, their valet brings them a police vehicle instead of their Mercedes-Benz. That’s a helluva hangover right there! So now it’s up to Phil, Stu and Alan to retrace their steps  and find Doug just in time before he misses his wedding.

At first, I was intrigued to see this movie, but at the same time, I also had skepticism because most comedies made in the States aren’t exactly entertaining. Technically, The Hangover isn’t anything special in regards to its plot. Waking up with a hangover and no memory of what happened the night before is an experience most people can relate to, but it’s also a surefire device for comedy. However, the screenplay (the strongest point of this film) is smartly laid out from beginning to end, it has a good pace, it’s actually fun to watch and there’s a high level of chemistry between the main characters which helped carry the film in a natural way. It is quite a raunchy comedy, but unlike most raunchy comedies, this one is actually well executed and earns its laughs as well as the payoff to the main storyline.

So if you felt skeptical about watching this film, give it a shot. It’s actually enjoyable, it’s guaranteed laughter and it doens’t involve the likes of Seth Rogen and other comedy figures that aren’t entertaining or have gotten stale.

P.S: Despite my enjoyment of The Hangover, I do feel dreadful about The Hangover II (which premieres in a couple of months). The Hangover franchise might end up turning into something worthy of National Lampoon. Ugh.