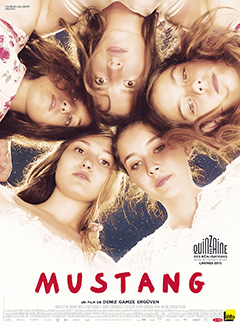 Mad Max: Fury Road and France’s Academy Award Foreign entry Mustang may not look like they have much in common, but… think about it– both have a female lead that takes up a vehicle for escaping the oppression of their surroundings. Grasping at straws? Probably. However, it’s impossible to deny the “girl power” elements of director Deniz Gamze Ergüven’s debut, which follows the life of the little Lale (Sensoy), the youngest sister of this sibling quintet formed with her sisters Sonay (Akdogan), Selma (Sunguroglu), Ece (Iscan) and Nur (Doguslu), who get into trouble for playing with boy schoolmates in the water.

After being denounced by their grandmother (Koldas), who accuses the girls of “rubbing their genitals on boys heads,” the girls’ uncle Erol (Pekcan) and their whole family decide to keep them on check by getting rid off all things that might corrupt them (electronics, clothing, etc.) and start prepping them as brides, to young Lale’s disbelief, who is still at that age of wanting to play around and is more interested in football soccer than the opposite sex.

The tone of Mustang sets the mood as if it were a slice of life movie, when we see the girls leaving school and having a bit of fun splashing water around, nothing outside the school break norm, and shifts tone to a thrilling wedding escape by the end. However, it never forgets the ride by making us gasp in indignation every time Lale’s rights for a free childhood were stripped away as her sisters rebelled one after the other. I laughed, I cheered, I worried at each of the sisters’ fate, I was incredibly distressed… and I hoped. I left the movie having felt all these feelings, and it left me hopeful and sad. All at the same time.

Sensoy does an amazing job at carrying this as her Lale sees sister by sister disappearing from her life, never able to do anything more than trying to sabotage their arranged marriage meetings. She’s defiant, but always playful. She’s not trying to bring down the system, she’s just mischievous. This is important because the main antagonist is her grandmother, and we never see Koldas playing her as an evil cartoon. Ergüven’s characters never become exaggerations of ideas; grandma and uncle are just getting them married because that’s what they did, everyone else acts accordingly because that’s how it happens.

Though Mustang may play like arthouse foreign flare for some, it all boils down to a feel-good film, or as feel-good a story about girls not being let to live their lives as they please can be. I loved it. Possibly my favorite film of the year– so far.