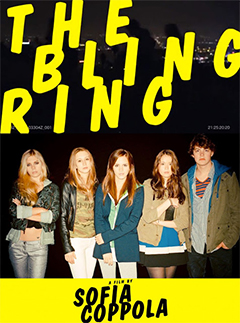 The Sofia Coppola that we’ve all come to know is both long gone and ever present in her latest film, The Bling Ring. All of the traditional long takes and luxuries of the privileged are still there, but now there’s a satirical edge and unfamiliar energy that goes a long way.

“Let’s go shopping,” is the first line uttered after a deliciously long take of a group of teens breaking into a house, and immediately after we’re assaulted by a montage of robbery, Facebook pages, jewelry, and press interviews that embodies everything that the youth of the film longed for.

Fame and fortune doesn’t always come easy, though for some it does. The Bling Ring is composed of both the privileged and the not-so-privileged, but they all share one thing in common: they want to rob. Not all at once, of course, as each one is slowly brought into the ring by circumstance.

Rebecca (Chang) and Marc (Broussard) are the first two to dive into the lifestyle of the rich and famous, and they’re brilliantly contrasted against each other. Rebecca’s persona is always relaxed and knowing, a mastermind of sorts, while Marc’s initial fear soon turns to fascination. That fascination is also shared by the perpetual Privileged White People jokes Chloe (Julien) and Nicki (Watson). Each actor falls into their teen role perfectly and Coppola knows exactly how to reflect their personalities in drawn out sequences, though their arrest scenes are best at magnifying every little aspect of their personalities in the best way.

Where many complained that Somewhere felt the same as Lost In Translation, The Bling Ring shows a clear maturity in Sofia Coppola’s talent. She has no qualms with changing styles frequently, from the incredibly stylistic moments we’ve seen before to webcam and documentary style footage, and it’s that less-polished feel that makes it so appealing. Even when running through the luxurious homes of Paris Hilton, Megan Fox, and others, it doesn’t feel like something an audience should be striving to do.

Plenty of darkness populates the film, in clubbing and robbing alike, and Coppola taps into some tension building that hasn’t been seen in her work before. No scene emphasizes just how wrong what they’re doing is like the mesmerizing long take of Marc and Rebecca running through Audrina Patridge’s mostly glass home, showcasing their heist almost entirely in silence.

Each stupid decision leads to another that is just as stupid, and while Coppola makes these teens seem almost invincible in the first half, she brings the hammer down hard in the latter half. There’s a self-awareness in the film’s humor that is impossible to miss, much of which comes in Emma Watson’s one-liners like “I’m a firm believer in karma” and “I think it’s my journey to push for peace,” as well as her interactions with Farmiga and Mann.

“It’s kind of showing America has this sick fascination with a Bonnie and Clyde kinda thing,” Marc utters in the film, and that’s exactly the point she’s getting across. Neither this nor something like Spring Breakers is exactly a well-hidden criticism of the audience members who will want to go out and snort some coke immediately after, but that doesn’t make it a bad movie. If anything, that lack of subtlety just makes The Bling Ring all the more entertaining to watch.

While the slow and dreamy days of her past work are not all long gone, the energetic atmosphere and soundtrack that comes with The Bling Ring is new territory for Sofia Coppola, and she owns it by making a film that’s accessible to fans and haters alike.