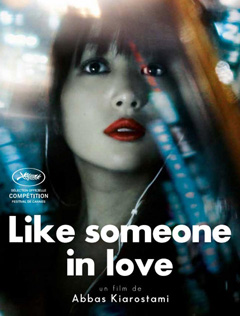 Iranian film director Abbas Kiarostami continues sharing his personal vision on modern urban dramas. After the French elegancy of Certified Copy, this time he turned to Japan to tell the story of Akiko (Takanashi), a sociology student who works as a prostitute in Tokyo.

Like Someone in Love starts with Akiko receiving a phone call from her inquisitive boyfriend, Noriaki (Kase), whom we get is obsessed and worried about his girlfriend. In turn, she tells him she’s going to the train station to meet her grandmother who came to see her, but soon we realize that Hiroshi, her pimp, had other plans for that night. He wants her to spend the night with a man whom he has in higher consideration.

Akiko starts listening to her grandmother’s messages on her way to the client’s place. She had waited all day to meet with Akiko and is ready to depart again. This was the saddest moment of the film, since the woman shows the total trust she has in her granddaughter. When Akiko arrives to the meeting place, she finds that the client was an old widower named Takashi (Okuno), who just wanted her company to talk, eat and drink. After a small conversation she falls asleep from exhaustion.

The next day, old Takashi gives her a ride to the University, where her Noriaki was expecting her. After a brief arguement with Akiko, Noriaki has an interesting conversation with Takashi who pretended to be Akiko’s grandfather, in which he reveals his intentions to marry Akiko; in his opinion, getting married would give him the right to know the truth about Akiko’s mysterious disappearances.

Finding a problem with Takashi’s car, Noriaki offers himself to fix it in his own garage. The troubles will start when a client of the garage recognizes the old Takashi as his former professor, putting the scheme in jeopardy. Good surprises will be reserved to the end.

Like Someone in Love is a smart movie of circumstance, made in a sober manner. Applying a moderate pace, Kiarostami builds the characters so well, with such delightful details that they leave no room for doubts; we can gradually be aware of Akiko’s naivety, Takashi’s protectiveness, or Noriaki’s violent jealousy. The natural approach prevented staged situations, whereas the option of using implicit scenes instead of too explicit, is already a staple in Kiarostami’s filmmaking style. The levels of satisfaction increased as the story proceeded, in this simple, objective, and engaging film.