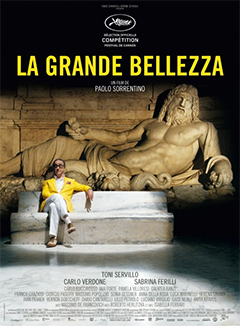 Not since Fellini have foreigners and Italians alike been able to experience such an explicit vision of Rome; a vision that so surreptitiously captures a world so many experience, but so few can put into words. This, Paolo Sorrentino’s Rome, is a world away from the one established on film over half a century ago. The Great Beauty presents us a glimpse into this modern Rome through the eyes of one man: Jep Gambardella.

While Sorrentino’s style is infinitely different to that of Fellini, it’s impossible to deny the similarities in plot that The Great Beauty and La Dolce Vita share. The journalist, the eye-opening beauty, the waifish plot, the critique of Italian society and religion, and the search for some semblance of happiness; it’s all there, but its presentation is an all too different picture. By no means is Jep the same man that Marcello was and that’s exactly what makes this film just as fascinating in its own special way.

Where one mourned the minutes lost watching Sean Penn achieve an ounce of gravitas to propel the boring This Must Be the Place to anything above mediocre, here we return to Sorrentino’s muse Toni Servillo. One could boldly say he’s the Mastroianni to Sorrentino’s Fellini in more ways than one, and what he lacks in youthful looks, he makes up for with an ever-changing screen persona that intoxicates just as much as the film’s true star: Rome. The tiny, reserved man from Il Divo is long gone, and in his place is a vibrant, delightful man in his sixties. Or at least that’s how he begins. Even with his age, Jep never slows down, always hoping to find the beauty in life, just as Rome herself refuses to slow down.

And there we find the driving force to Jep’s character, and what makes an arguably plot-light film a compelling watch: the search for la grande bellezza. Throughout the film, multiple people question Jep on why he never bothered writing another novel after his debut decades ago. The excuses he gives are light; “Because I went out too much at night,” he jokes. “Rome makes you waste a lot of time.” It’s funny at first because his character plays it off in the most amusing manner, reminding one particularly downtrodden character, “We’re all on the brink of despair, all we can do is look each other in the face, keep each other company, joke a little. Don’t you agree?” But Sorrentino knows better, and he wastes no time in driving home the reminder that time is of the utmost importance.

Though at times it does seem as though the director has almost too much to say. By no means is this a bad thing, but The Great Beauty sometimes feels as though Sorrentino has taken bits that could have been part of a feature of their own and placed them within this one. Satire and criticism of a hypocritical religious world, of a bourgeois society that forces its youth into submission, and of art that lacks any semblance of meaning, are much appreciated and well-inserted, but one inevitably desires more. And it’s nearly impossible not to want more from a film as intoxicating as this one.

Luca Bigazzi’s cinematography does wonders with Rome, showcasing its historical beauty in the day-time while simultaneously offering up a feast of nightlife insanity that make for some of the best scenes. If you’re not drawn in immediately by Jep’s sixty-fifth birthday party and the booming sounds of Bob Sinclar & Raffaella Carrà’s Far l’Amore and El Gato DJ’s Mueve La Colita, it’s clear the film may not be for you. There are other pleasures to be found than the visuals, many of which are in the equally impressive soundtrack and score, especially in the performances that inhabit the screen. While none can ever take the stage from Servillo, Sabrina Ferilli’s middle-aged stripper Ramona is a fascinating woman all her own, adding as much depth to the film as she does to Jep.

All things contribute to Jep’s journey at the end of the day, and one should be thankful that Paolo Sorrentino focuses heavily on Jep and his meditations on mortality. There’s a clear distinction between the man we meet at the start of the film and the man we’re left with. As Rome grows and expands around him, it swallows the presence of every being he cares for, be that through death or simply disappointment. Time is catching up to him as it catches up to all. All except Rome that is.

Through all this, he keeps searching, just as we all do, for something more. Something that will make all that wasted time worthwhile, or make that next novel an interesting one. Whatever it may be to each of us, we’re all just looking, and waiting, for The Great Beauty.