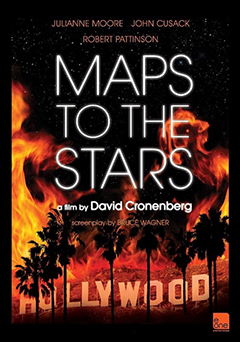 I haven’t been tremendously enthusiastic about Cronenberg’s work since Eastern Promises in 2007, hitting the lowest point with my hatred for Cosmopolis, so I wasn’t exactly dying to watch Maps to the Stars despite its quite stellar female cast. However, if you gotta force yourself, at least do it for Moore’s performance as the Hollywood washed-up actress looking for her next big break.

Oh, the illusion of Hollywood~ or better yet, its dirtiest secrets are the based of Cronenberg’s latest with Moore playing -at least- a second generation Hollywood star, Havana, trying to jump-start her career once again in a remake (or reinterpretation) of one of her mother’s (Sarah Gadon) films… who happens to be haunting her. In the meantime, current child star Benjie (Bird, in a Justin-cross between Timberlake and Bieber LOL) is being hunted by his past and origin, as his parents (Williams and Cusack) do the impossible for damage control.

Though labeled a straight-up drama on IMDb, Maps to the Stars plays as a quite satirical black comedy telenovela following the lives of very unlikable characters doing horrible things- incest cover-ups and jealousy murder attempts are some of the going-ons as this bunch of self-obsessed and entitled Hollywood residents try to live their “normal” lives. Technically speaking, while Maps may lack the cinematic and lush qualities of the quite gorgeous The Taste of Money by Im Sang-soo, it becomes much more of an engaging (and I dare say, “fun”?) ride — if you secretly indulge in a little tumble in the gossip gutter.

While all actors are fixed with the characters they play best — Wasikowska is getting stuck with the stoic and slightly off girl, Moore has the neurotic middle-age down to a tee by now, and Cusack with Pattinson are kinda the most interchangeable of actors — it works for the story and its characters, especially for Moore who gets to shine as the insecure -yet condescending and self-absorbed- Havana. She lies, takes advantage of people, and in turn is used by others, mirroring (to extremes) Benjie’s own interactions with the people that work with and for him, as well as his parents. However, neither of them are the most dislikeable when taking Cusack’s role as TV psychologist and -sort of- motivational speaker and spiritual guide to the stars, Dr. Stafford Weiss, as he begins seeing his domain burning down to the ground- which, I gotta admit, has to be the weakest visual element in the film.

My favorite bit, however, has to be the most vulnerable brief encounter between Wasikowska’s and Williams’ characters, tearing down the harsh cold exterior that Williams showcased in her scenes as the ever common backstage parent.

I’m still considering whether to give an extra quarter of star for Moore’s performance.