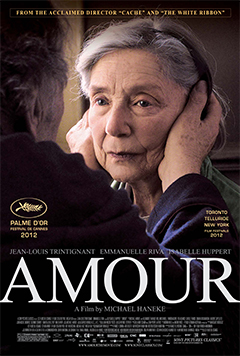 The name Michael Haneke has become practically synonymous with suffering. The Austrian filmmaker and the bleak reality of his films has been a topic often discussed in the film world. Now, with Amour scoring him five Academy Award nominations including Director and Picture, he’s become the talk of the town in Hollywood.

Amour focuses on Georges (Trintignant) and Anne (Riva), a couple of retired music teachers in their eighties. When Anne suffers a stroke, the couple tries to return to a somewhat normal life, but find themselves having more trouble dealing with it than expected.

While Amour could be considering Haneke’s most emotional film yet, nothing about the film actually makes you want to care. That touch of sentimentality that you’d normally get with a story like this is missing here, and it almost makes it a chore to watch. It’s not that one should be expecting the tale of this elderly couple to be as captivating as something like the disturbing Funny Games, but there needed to be some sort of motivation aside from the fact that they’re old and sad. Sadness for the sake of sadness isn’t that great a reason to spend two hours watching a film.

For something that should be immensely character based, the script is as procedural as can be. There is no arguing that Haneke has always kept his audience at a distance throughout his oeuvre, but this is a story that demands a tenderness that doesn’t exist.

Keeping Amour tightly concealed within the couple’s apartment for most of the film was a nice touch that enhances the symbolism of feeling trapped decently, but not all the symbolism in the film works in its benefit. A certain metaphor with a pigeon that flies into their apartment is heavy-handed, dragging on when one just wants it to end, which is exactly what Haneke wants you to think while watching.

The only solace we find in the cold world that Haneke has created in Amour are two amazing performances from the film’s leads. Riva and Trintignant are stellar, and there is nothing about their performances that doesn’t seem wholeheartedly honest. Where the emotion is missing in the script, we have their impressive work to fill the gaps.

While the Amour does have its issues, there’s nothing genuinely bad about Michael Haneke’s work here. There is no doubt that many have and will find themselves head over heels for it, but the reality is that it’s far from Haneke’s best films. Those unfamiliar with his work would do better to experience films like The Piano Teacher and The White Ribbon instead.