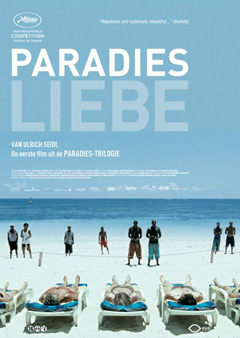 The relationship between older women and younger men is one not often explored outside of scandal and romantic comedy. Ulrich Seidl, in a film that is both depressing and strangely amusing, gives a whole new look at these older women who long for the paradise that is a young man’s love.

Paradise: Love, the first film in Seidl’s Paradise trilogy, introduces us to Teresa (Tiesel), a middle-aged Austrian woman about to embark on a trip to Kenya with some friends. There’s something almost refreshing about this woman who doesn’t seem to have any shame in not having your typical Hollywood body type, but her personality is something that needs work. Teresa and her friends are all about casual racism to the point where they sit at a bar, not even ten feet away from their African bartender, and talk about the scene and taste of a black man’s skin and how it’s reminiscent of coconut.

And that’s where Ulrich Seidl and Veronika Franz shine: addressing racism, sex, and the power of the unsettling. It’s a film about exploitation through and through, as Teresa’s journey devolves into the business of “love” in her experiences with the men from Kenya. Sex under the guise of love is central, and Teresa isn’t one to rush into it, but once “love” takes hold of her, she is easy to manipulate. She attains this feigned romance from a one night stand with an African man and in turn he coaxes her into giving his friends and family money. This is where the cycle of exploitation kicks in, with the African men controlling these same European women who long to control them.

Seidl is as unsubtle as can be in getting his themes across and his shot composition enforces that more often than not. One shot in particular splits the African men standing on the shore from the tanning Europeans with a rope and a guard, quite literally showing the split between black and white. The film looks great, especially in how natural it all feels with plenty of long takes, but there’s almost a muted sense of boredom throughout. There’s an unnecessary repetition in the way he repeats many of the events Teresa goes through and it makes the two hour length a somewhat emptier experience than the false idea of love these characters are experiencing.

These women are begging to experience something new and strange and Seidl throws that all out there by having them waddle around in the skimpiest outfits or topless looking for love with no sense of shame. Margarete Tiesel is there with him for every damn minute of it, through thick and thin, and she brings out the desperation in a character like Teresa beautifully. For all the casual racism and endlessly foolish mistakes that would normally make her an obnoxious character, she plays it in a manner where one sometimes feels sympathy for her.

Uncomfortable laughter might kick in at more than one point as one watches the events in Paradise: Love unfold, and Seidl’s lack of subtlety is exactly why that happens. In a film all about exploitation, it would make no sense for all of these actors and actress to keep their bodies hidden. This abundance of nudity and sex is completely necessary, whether or not anyone actually wants to see it. Nothing quite beats the climax though, in which Teresa and her friends practically abuse a boy for hire all for the sake of seeing who can give him an erection.

As unappealing to watch as many of the scenes in Ulrich Seidl’s Paradise: Love are, it’s a nice kick off to a trilogy that will hopefully continue to be an interesting exploration of humanity’s longing for some semblance of passion.