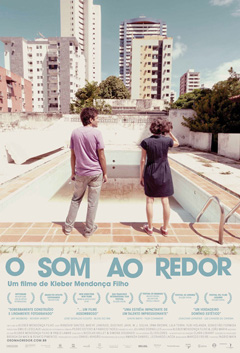 A very agreeable surprise came up with Neighboring Sounds, one of the freshest movies released lately in Brazil, along with Southwest by Eduardo Nunes. In his first fictional feature film, and after some experiments on short film and documentary, Kleber Mendonça Filho presents himself as a promising writer and director, portraying a middle-class neighborhood of Recife, Brazil, with a witty vision.

In order to define the spirit of the neighborhood with all its socio-economic divergences, the story guides us through a series of adventurous situations, most of them unexpected and intriguing. We can follow the affair between João (Jahn) and Sofia (Brown), the leisure times of housewife Bia (Jikings), the fears and concerns of the landlord Francisco (Solha), or the arrival of strange men from a security company whose intentions were collect money from the neighborhood’s inhabitants in order to protect them from bandits.

Actually, insecurity is everywhere in this film, a tough reality that is addressed without the common exuberance associated to Brazilian cinema, but rather adopting a realistic independent style. As the title suggests, the surrounding sounds have a huge weight in the story and in the way we absorb the events, since the howl of a dog or loud music in the streets could cause exasperation on some characters. Precious details are presented in every scene, composing the bigger picture of an unbalanced society with all the problematic aspects about human relationships and personal needs. While some behaviors are completely normal, depicting a calm quotidian life, others seem mysterious or unusual, creating a curiosity that refuses to leave.

Some episodes were so delightful, abrupt, and unforeseen that I kept them in my mind. I’m remembering of insomniac Bia being attacked by a neighbor, smoking a joint with the help of a vacuum cleaner, or getting horny with a washing machine; or João trying to sell an apartment in a building that was associated to a suicide; or even a very realistic condominium meeting to discuss what to do with the old doorman who sleeps in every corner. Some other scenes are meant to baffle us, and then are purposely left behind without explanation, accumulating tension that never really bursts in any occasion. This fact can become frustrating for some viewers, but the originality, irreverence, and loose style adopted, made Neighboring Sounds a distinct experience, even with an inarticulate storyline.

Highly acclaimed in its country of origin, where it became an uncontested winner in Festivals such as Gramado, Rio de Janeiro or São Paulo, this bizarre yet audacious film will not have difficulties in triumphing outside doors, even considering that its main enthusiasts will come from restricted audiences.