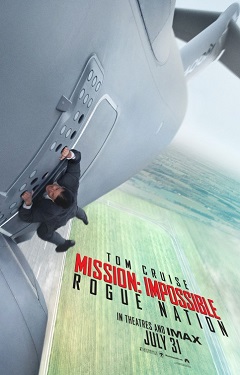 Note: This film requires an optional viewing of Mission: Impossible – Ghost Protocol since certain events and elements are displayed in Rogue Nation for storyline purposes.

Mission: Impossible – Rogue Nation follows Ethan Hunt (Cruise) in the mission he was assigned to by the end of Ghost Protocol: to take down the Syndicate, a multinational criminal organization formed by ex-operatives. As Hunt and his team works on taking them down, CIA director Alan Hunley (Baldwin) gets the IMF shut down completely, blaming it for the attack on the Kremlin. However, Hunley’s actions against the IMF, and hunting Ethan down couldn’t happen at a worse time because the Syndicate now knows everything about the organization. In order to restore things back to normality, Ethan has to prove that the Syndicate actually exists, learn how they really operate and take them down by any means necessary before things take a turn for the worst.

If there’s something distinctive from Rogue Nation that makes it stand out from the previous M:I installments, it might have to do with the stakes being much higher for everyone involved in both sides, along with the tension being sharper from start– the beginning happens to be that heavily-marketed scene from the trailers– to finish thanks to the film’s breakneck pace. Rogue Nation showcases the usual highlights you would expect from the franchise in terms of visual stunts that defy logic, making Tom Cruise a world class action star. However, it also borrows moments and elements from all the previous films, most notably the first Mission: Impossible film and Ghost Protocol, the latter not only being a direct sequel to this, but we also see Hunt once again saving the world against all odds without the correct functioning of the IMF.

In terms of new things regarding the franchise, the wear and tear is shown on Cruise’s Hunt, and there’s a slightly stronger emphasis on the comedy spectrum with Baldwin’s casting as the ultraconservative Hunley having a touch of irony (Baldwins fares well in his role, though), and the same applies to Tom Hollander as the Prime Minister, considering In The Loop. Also, strong comedy pairings includes Luther (Rhames) teaming up with Brandt (Renner), and Benji (Pegg) getting the major supporting spotlight by being Hunt’s direct sidekick for the most part of the film — Pegg really delivers in his upgraded position, and almost steals the show from Cruise. On the other hand, Renner’s Brandt came across as a minor supporting character, which goes against most of the build-up he received in Ghost Protocol as a potential replacement for Hunt in the IMF since Brandt got stuck in the office position, constantly monitored by Hunley, and teams up with Luther; the interactions between both came across as awkwardly funny. As far as other characters are concerned, Ilsa Faust (Ferguson) is the only one whose interactions blurs the lines between good and evil, while Solomon Lane (Harris) comes across as mousy and icy character with a touch of  Skyfall and Tinker, Tailor, Soldier, Spy.

By the way, Rogue Nation reinforces Tom Cruise strongly as the main draw of the M:I franchise, in stark contrast to the entertaining team effort combination displayed in the previous film, and that’s thanks to Christopher McQuarrie, whom previously directed Cruise pretty well in Jack Reacher. McQuarrie’s direction and writing not only endorses Cruise, but he also aims for a vision of Ethan Hunt’s world that seems to be a mash-up of Brian De Palma and Brad Bird’s respective directions for the character (serious and fun, respectively). In some aspects, McQuarrie edges out both directors, but in other aspects he doesn’t.

Is it worth the watch? If you loved the first and fourth film and you’re willing to fully embrace the 53-year-old action star Tom Cruise, you’re in for a treat.

P.S.: I wonder how Rogue Nation would have fared if Maggie Q and Paula Patton would have been available. [1] Maybe it would have changed the script, or maybe both would have played second fiddle to Cruise like almost everyone else did here except for Pegg and Ferguson to a certain extent.