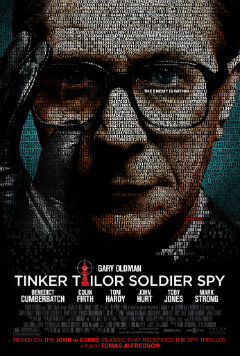 My brother nagged me for months about this movie. He somehow has gone and become a huge cinephile and this movie was a top priority. Even I wanted to watch this movie because of the combination of Gary Oldman and Colin Firth. Plus, who doesn’t love a good spy movie?

It was pretty much mission impossible (sorry for the pun) to get a ticket to see this movie at the cinema. Every time I tried to get some tickets, every showing was full. I wasn’t expecting this movie to be that popular, so when the brother and I finally were able to see it, I was pretty curious to find out what made this movie so sought after.

I guess, to me, the movie was pleasant. There wasn’t any huge drama nor action, it was all very subdued. I want to say that it was a bit boring, the plot kind of dragged along and everything was so… subdued. Not that it’s bad, this was more of a smart suspense/action movie.

Subdued is the perfect word to describe Gary Oldman’s role. Mr. Smiley is an old spy that has worked for the UK secret service for a long time. At the beginning of the movie, he is quickly disposed of because he is an “old-timer” in the office. A “coupe” occurs and he is forced into retirement. His methods and those of his boss are seen to be outdated and they are fired. As a true a gentleman, he steps down and doesn’t think much about it. Suddenly, a rumor that a mole might be operating from within the inner most circles of the agency starts to spread. Smiley is then asked to unravel the true identity of this mole. It’s important to find the mole and find it fast – too much is at stake.

To me, Oldman was a treat as Mr. Smiley. He is stoic, subdued and grim. Underneath the surface he is a fox, a hunter and a strategist. Although he didn’t say much, everything about the character demanded attention – all of the acting was done with the eyes.

A nice surprise was Benedict Cumberbatch (many of you might know him from BBC’s Sherlock). Something about him kept me a little glued to the movie; it was partly because of him fumbling to keep his cool under pressure. It added some comic relief to the grimness of the movie.

I was terribly bored with Colin Firth. There was nothing interesting about his performance. I kept complaining that he was so “Colin Firth”, like he was just relying on doing the same part he has been doing as of late (that of the English gentleman). It’s all starting to blend together.

As a movie, Tinker, Tailor, Soldier, Spy is very grim and grey. It comes off as a bit serious because it portrays the atmosphere of the Cold War.

The theme of the movie is a form of chess. Chess demands concentration, strategic analysis and patience. It is very interesting for those playing but not always for those watching. That pretty much summarizes this movie to me.

You can check out our review of the novel here.