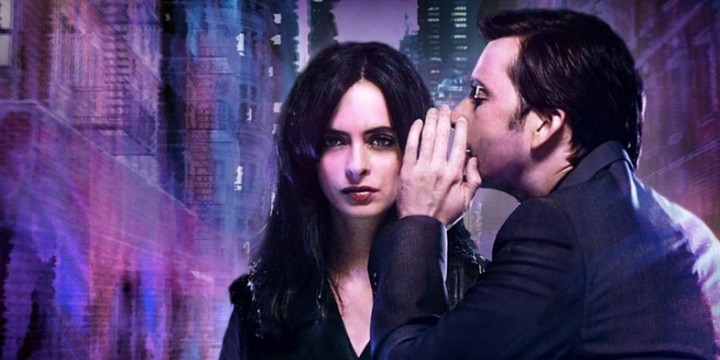 I don’t read comics, can you tell? However, when everyone on my timeline (who also doesn’t generally read them) started raving about Marvel’s Jessica Jones, I couldn’t help it but catch up with some other Netflix series (I also tried to watch Narcos).

For the uninitiated (like me), Jessica Jones (Krysten Ritter) is a P.I. with super strength that sits in between the universes of Iron Man, Spider-Man and Daredevil (and perhaps X-Men, I can’t tell anymore). However, you don’t need any background to sit back and freak out as she confronts the dandy mind-controlling Kilgrave (David Tennant), and we explore her sisterly-bond with ex-child actress and now talk show host, Trish Walker (Rachael Taylor).

While Netflix’s Daredevil favored the dark gritty action flare, the first episode titled AKA Ladies Night starts with a striking film noir flare with a stylish -yet typical- P.I. montage of shadows and tungsten city lights. It’s never a constant element on the show, even if Jones is the perfect noir antihero– downing her pains in cheap whisky, pushing people away because she brings bad luck to those around her, and always with a wisecracking comeback much more like Whedon’s Buffy Summers would in her darkest seasons. I loved it.

She’s in trouble when she’s hired by concerned parents who are looking for their daughter, Hope (Erin Moriarty), which will turn out to be just the beginning of Jessica’s problems. Except for BFF Trish, who subs as non-superhero sidekick and constant (peppy) emotional support, the rest of the characters just become hurdles– Jessica’s soulless badass lawyer boss Jeri Hogarth (Carrie-Anne Moss) was great, but we all saw that one coming, no? Jessica’s junkie neighbor Malcolm (Eka Darville) becomes an emotional weight that ruins everything in ep10, AKA 1,000 Cuts, alongside nutty neighbor Robyn (Colby Minifie). And though equally-gifted barman Luke (Mike Colter) and Special Ops cop Simpson (Wil Traval) also become more problems for her, at least they had more to do with the overall scope of the series and MCU.

Though everyone’s highlight is Tennant’s turn as the condescending sadistic S.O.B who’s obsessed with Jones, blurring his line of rape and consent, and manages to play the victim to a tee… it got boring for me. My favorite aspect of the show was Trish’s and Jessica’s relationship, which wasn’t entirely clear from their first interaction, but it’s slowly developed throughout the episodes in flashbacks of Jessica’s origin story to show us how this will be the most important relationship in their lives.

Minus quarter because it’s 3 episodes too long. It got tedious.