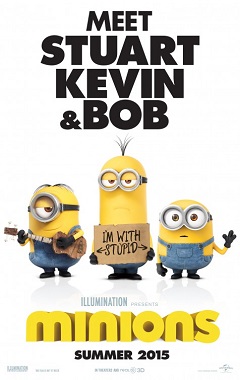 From the moment the Minions (all of them voiced by Coffin) made their first-ever appearance, a lot of people around the world quickly fell in love with them to the point that they mattered more than anything else surrounding the first Despicable Me film thanks to their gibberish-esque language [1] and their comic antics. The love for the yellow cute-ish beings grew stronger and they were showcased more often — and in relevant fashion, if I may say so — on Despicable Me 2.

Minions explores the origins and purposes of the small, yellow creatures who have existed since the beginning of time, evolving from single-celled organisms into beings who exist only to serve history’s most villainous masters. The film, however, puts the spotlight on three of them: Kevin, Stuart and Bob. By 1968, when things started to get worse for the Minions — isolation from the world in Antartica after killing almost every villain they have served ended driving them into depression — Kevin takes it upon himself to find a new master to serve. This leads them to New York City, where they learn about Villain-Con and Scarlett Overkill (Bullock), the latter being the world’s first female supervillain who might just be the Minions’ hope for salvation.

I’ll admit that the Minions are still fun to watch, in particular when we get to see all the villains they have served prior to 1968 as well as seeing certain antics from the main trio during their stay in New York, Orlando and London, the latter being the city in which most of the action takes place thanks to Scarlett’s presence. Other strong points in the film’s favor includes the animation and attention to past details in New York City as well as boasting a pretty great classic rock soundtrack. Sadly, Minions happens to be solid proof that the small, yellow beings cannot carry an entire film all by themselves. Even their comic antics aren’t all that funny to watch, but that’s due to their inevitable overexposure and a very thin story-driven plot.

The screenwriting from Brian Lynch (he had prior Minions experience by writing for the theme park Despicable Me: Minion Mayhem, [2] but his film credits includes Hop and Puss In Boots) lacks focus in terms of the main attraction and the film’s plots, dragging the film and overexposing the Minions way too much for anyone’s taste. Despite having only 3 Minions to focus on, Lynch doesn’t really develop them beyond their basic characteristics. I can understand that it’s challenging to develop any Minion beyond their usual structure because you might alienate the target audience. To be honest, I believe that the Minions work at best in small doses and/or as supporting characters that gets balanced with well-plotted human protagonists and antagonists, something Minions severely lacks unlike the prior Despicable Me films that always kept Gru as the true lead despite the Minions “stealing the show” as many pointed out. On the other hand, I think that Scarlett and her husband Herb (Hamm) should have had the writing centered on them instead of the Minions, who get involved with Scarlett’s plot for London’s domination. However, the storyline plot involving Scarlett and the Minions as well as the writing for the Overkill couple aren’t strong enough to sustain Minions and the viewing experience becomes more tiresome as time passes by.

Even if the final scene in Minions comes across as a huge momentum boost and it could possibly work as a direct tie-in for Despicable Me 3, I feel like Minions would have been better off as a short film with them killing all of their pre-Gru masters (what was shown here was actually solid to watch) since they aren’t designed to work for story-driven films. Kids will definitely like Minions a lot anyways, but the adult audiences (specially non-parents) might not find it that enjoyable when compared to the franchise’s previous films.