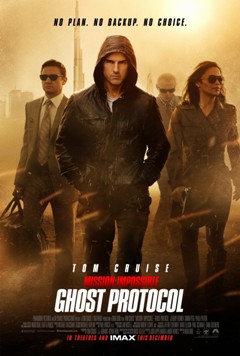 Brad Bird, best known for working in animation with films like The Incredibles and Ratatouille, makes his live-action film directing debut with the fourth installment of the Mission: Impossible series.

Mission: Impossible – Ghost Protocol follows Ethan Hunt (Cruise) and his team as they attempt to track down terrorist Kurt Hendricks (Nyqvist), who holds nuclear launch codes. The team must find Hendricks,  retrieve the codes and prevent a conflict between the USA and Russia. However, something goes wrong during the mission and the President of the United States invokes Ghost Protocol, disbanding the IMF. Against all odds, Ethan and his team will have to work with what resources they have left and stop Hendricks.

Brad Bird and the writing team succeeded in doing something that M:I II and M:I III failed to do — make a fun and entertaining film. Thanks to the bag of tricks employed during the action scenes, state-of-the-art equipment and technology, a straightforward script and a brand new team, Bird did just that.

Ethan’s team includes three other members. First, there’s computer whiz Benji (Pegg), who previously appeared in M:I III. Next, we have Brandt (Renner), an analyst with some field training experience. Third and last, Jane (Patton) who brings a dose of estrogen to the otherwise testosterone-ridden team and has a backstory of her own.

While Ghost Protocol makes Tom Cruise shine through dangerous stunts and some of the best lines in the film, I gotta say that Ethan’s team had really good chemistry and made the film engaging to watch. Simon Pegg gets more screentime compared to M:I III and is funnier — he almost steals the show. Jeremy Renner plays well as a Hunt-like character and has great chemistry with everyone. And Paula Patton provides the sex appeal factor effortlessly while being capable of kicking ass much like her teammates. How fuckable did she look on that green dress?

The only problem Ghost Protocol had was the treatment of its antagonists. Léa Seydoux was okay at playing the deadly, sexy assasin-for-hire, Sabine Moreau. Despite Michael Nyqvist’s efforts, he wasn’t as menacing or good as Phillip Seymour Hoffman was on M:I III. The final encounter between Ethan and Kurt felt a bit rushed and the final battle’s resolution felt like a slap in the face. The antagonists were forgettable, but I’m willing to overlook that because the film is fun to watch.

Overall, Ghost Protocol can hang around with Brian De Palma’s M:I for the best film in the Mission: Impossible series. It’s definitely not boring like M:I II was and it’s simpler to watch than M:I III. Brad Bird and the cast refreshed the series by emphasizing teamwork, not taking itself too seriously and making an action film that delivers the thrills while remaining watchable, which is more than enough for the action genre nowadays.