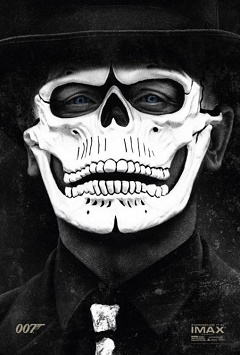 The biggest question most people had in mind regarding Spectre, the 24th film in the James Bond franchise, had to do with how it could top Skyfall. In theory, what was seen here should have worked. In execution, however, that’s another story.

Spectre has Agent 007 (Craig) dealing with things from his past, which leads James Bond to deal with the criminal organization known as Spectre, led by Franz Oberhauser (Waltz), who is actually responsible -in one way or another- for all the criminal acts previously seen in the last 3 Bond films. As he tries to put an end to Spectre, there’s also other problems going on in the UK with the merging of MI5 and MI6, which is led by Max Denbigh a.k.a. C (Scott), who shuts down the 00 program, and wants the UK to join the global surveillance program known as Nine Eyes.

“Welcome, James. You’ve come across me so many times, yet you never saw me. What took you so long?”

Does the plot sounds similar to you? If your answer is yes, I bet you have most likely watched Mission: Impossible – Rogue Nation. Actually, both films share the same premise and had pretty tough acts to follow– to be fair with the Bond franchise, the previous one had a big “awards contender” aura, unlike Ghost Protocol. However, Rogue Nation executed its premise much better than Spectre did, and its budget was half of what the Bond film cost. While we’re at it, you can also add Captain America: The Winter Soldier pulling the premise better since Spectre operates like H.Y.D.R.A. (sort of), while MI6 is more like a mash-up of S.H.I.E.L.D. meets the IMF, in terms of how the supporting characters are presented, if you know what I mean.

Similarities with other franchises aside, this actually features several nods to past films, dry humor is showcased well, boasts a gigantic explosion (how long will its Guiness Record last with Michael Bay still alive?), and has its share of good moments, most notably with the really great opening sequence in Mexico intertwining the Day of the Dead with the action that leads to Bond’s main mission. Craig is still playing a great James Bond, looking pretty badass in his Tom Ford suits, and supporting characters such as Mr. Hinx (Bautista), Mr. White (Christensen), Q (Whishaw), Mallory a.k.a. M (Fiennes) and Eve Moneypenny (Harris) are allowed to stand out. It was actually cool to see that there’s an actual life for those in the spy field, as Moneypenny points out to Bond halfway through the story. There’s also social commentary regarding information control and privacy, which is seen in both storylines involving Bond versus Oberhauser and the Nine Eyes with M going against C when he realizes that things will take a turn for the worst, if C proceeds with his plans.

However, this installment doesn’t come across as excellent, despite the stakes being higher for everyone involved. Much like Quantum of Solace couldn’t surpass Casino Royale, the same happened with this one not being able to top Skyfall, but Spectre is more watchable than Craig’s second turn as agent, since it has the tangible of bringing a bigger worldwide threat, and that lacked something to stand out while his introduction to the franchise relied successfully on a lesser experienced character, and Skyfall had Bardem’s Silva as its strongest asset.

Actions scenes didn’t felt that exciting to watch, which could be due to how the screenwriting plotted scenes and characters, which were the ones who suffered the most with the screenplay– Waltz’s Oberhauser hardly felt like a solid villain to watch, and Leá Seydoux as Madeleine Swann, who is Mr. White’s daughter and would have been much better off without falling for Bond out of nowhere. I understand that it’s hard for women to resist his charms, but Swann would have been better off considering her upbringing made her strong enough to fend off any threats against her.

I still feel mixed about Spectre as a whole. Anyways, the credits scenes states that “James Bond will return” as always, but the final scenes makes you wonder if Daniel Craig will return for a fifth turn as the famous agent.