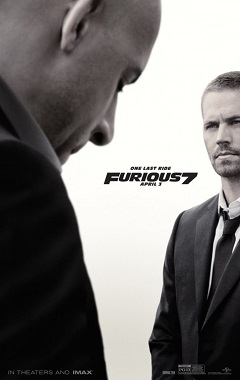 I’m not much of a fan of the Fast and the Furious franchise, despite many people loving this series as if it was a classic while ignoring its other shaky films after the first film premiered. Anyways, fans of the series already knew that they were going to deal with the aftermath of Han’s (Sung Kang) death in Furious 7. However, no one expected Paul Walker to pass away a few months later, which changed plans in many ways for the seventh installment of the car-driven series. Walker’s death, along with the franchise’s revitalized popularity since Fast Five, has made Furious 7 into a film that nearly everyone and their pets wanted to see on the big screens.

“Dominic Toretto. You don’t know me, but you’re about to.”

Furious 7 not only picks up where Fast & Furious 6 ended, but it continues to advance the storylines involving Letty’s (Rodriguez) memory loss and Brian O’Connor (Walker, in his final film participation that involves his brothers Caleb and Cody as stand-ins) dealing with fatherhood in contrast to his love for vehicles and bullets. The franchise continues to endorse the “family is first” motto, which has been omnipresent since The Fast and the Furious and constantly mentioned by Dom (Diesel). He’s not the only one who lives by that motto, as former Black Ops speclialist-turned-ghost-assasin Deckard Shaw (Statham) is set to avenge his brother Owen (Evans) and get rid of Toretto and his crew. Actually, Deckard killed Han and severely wounded Agent Hobbs (Johnson), which sets Dom into hunting Deckard before things take a turn for the worst.

There’s also a subplot involving the God’s Eye computer program, which allows anyone to track down any specific person. This comes into play when Toretto meets Frank Petty (Russell), who will help Dom track down Shaw if he finds the program and rescue hacker/developer Ramsey (Emmanuel) before mercenary Jakande (Hounsou) uses the computer and Ramsey for his own purposes.

The mixtures of the storylines involving the characterss and God’s Eye feels a bit messy to follow through early on, but Furious 7‘s biggest strengths mostly involves the crazy logic-defying car (and human) stunts, the fighting scenes and the character interactions, which are actually very entertaining to watch especially when it’s Roman (Gibson) and Tej (Bridges, a.k.a. Ludacris) blabbering about anything… or in terms of the stunts, the visually fantastic “air drop” scene and the scene with the car jumping from building to building in Dubai. Direction-wise, James Wan continues Justin Lin’s style without much problems. In terms of characters standing out, Diesel’s Dom remains as a badass with cheesy lines while Gibson’s Roman works really great as supporting comedy relief — he deserves a shot in a comedy tv show — Jason Statham looks deadly here and Kurt Russell looked like he had fun with his role.

I really wished Furious 7 had a sharper screenplay. I won’t deny that I had fun watching the film and the stunts presented here tops the previous ones, but certain characters’ lines could have been polished much better as well as the “family” motto being pushed stronger beyond simple interactions despite the series’ backbone. Statham’s Shaw made him looked the most deadliest he’s been in ages early on, but mixing him up with Jakande (Hounsou felt underused here along with Johnson and Rousey) took away some of that strengthened feel he had. And there was a scene near the end of the film that I felt it could have gone into a much darker territory, but it wouldn’t happen because it would drastically alter the franchise as a whole and it might feel kind of overkill considering Paul Walker, not to mentioning also depriving us of the strong payoff that Letty’s storyline received.

While I don’t think Furious 7 is the best film in the franchise because that honor probably goes to either the first or sixth film, I’d still give it an extra quarter star for how it handled Walker’s exit from the franchise in an unexpected way with class. Furious 7 wasn’t all about his character, but he gets a nice farewell by the end of the film that goes well with his character’s storyline, brings up the “family” motto nicely and it happens without closing the series for good.