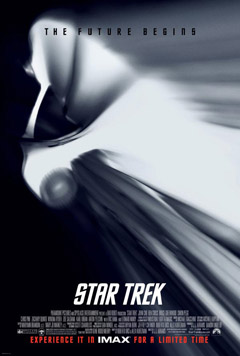 Star Trek (2009) is a great action movie worth seeing for it’s humor and smartass dialogue. In fact, the best parts of this Star Trek movie were all the parts that weren’t Star Trek, in so far as it was actually a movie and not another boring T.V. episode.

The idea of Star Trek in of itself is fine… sci-fi morality plays making commentary on the social issues of the day. Such analysis and parsing of today’s issues in T.V., or any other media, deserves the time and depth needed to address such things. Episodic television is a great forum to look at these things. If the Star Trek franchise ACTUALLY did this in the last ten years, it wouldn’t have looked like your mom’s best friend pole dancing to prove she’s “still got it.” You have two hours to comprehend and enjoy what’s happening on screen and don’t want to spend it listening to the Prime Directive and the repercussions of giving AK-47s to cavemen. In fact, you want to see cavemen with AK-47s. Phasers on stun is for sissies.

That being said, this latest movie feels very fresh for an otherwise formulaic franchise, due largely to J.J. Abrams as a real movie maker. Previous movies suffered from the fact that they were made by the same producers and crew as the T.V. shows. As in, they were cheap. Really, really cheap and weighed down by years of staid writing. This new movie feels bigger, more polished and artfully shot. Characters are shown in development, so you see what led to them becoming the archetypes we know as Kirk, Spock and McCoy. Kirk is a juvie, which explains why he’s such an arrogant jerk in the original T.V. series. McCoy is bitter and paranoic (I would’ve liked to see his more racist side) and Spock is incredibly repressed and crazy angry. As this is supposedly the first time we meet them, it’s nice to see personalities develop as opposed to the cardboard cutouts we usually see in Star Trek. In fact, it was outrageous seeing Spock in the beginnings of an actual relationship with the one person Kirk couldn’t get into bed.

Boring technobabble has been replaced with understandable English. Previous movies seemed to pad out minutes of running time by explaining resonate frequencies and coherent light forms. Star Trek penners often confused technical writing with smart writing. One example of this is Captain Christopher Pike hailing the enemy, “This is Captain Christopher Pike of the U.S.S. Enterprise. Who are you? (chest all puffed out)”. On screen, you see the intimidating enemy and think he’s ready to announce his intentions to wipe out the Federation, how he’ll do it and for what honorable yet malefic intentions, “Hi Christopher, I’m Nero.”

Just one example of many of how this latest Star Trek movie defeats and elevates expectations at the same time.