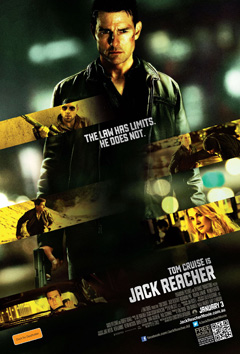 There are elements in Tom Cruise’s life that have crippled his stardom. The guy is weird with permanent crazy eyes, which in reality translates into some kind of cheesy intensity that’s really amusing. I haven’t earnestly laughed in an action movie probably since I caught a broadcast of The Long Kiss Goodnight on TCM, or maybe Chinese Zodiac — but I think that was intentionally funny.

Unlike Jackie Chan who is intent in making you laugh while he’s doing his action stunts, or Donnie Yen who just kicks ass plain and simple, or… The Expendables, Tom Cruise is serious. The character of Reacher in the book is the macho man who’s so massive that fans of the book wanted The Rock as the title character… either him or Vin Diesel; either way both would’ve lacked the serious silliness that made me enjoy the film. Nope, instead of the macho man, they got Tom Cruise who plays a macho man cool version of Tom Cruise. It’s hilariously enjoyable.

It all starts out with the tragic multiple shooting from a ex-military sniper gone crazy who’s arrested for killing five innocent people going about their day. We’re all familiar enough with the situation of gun violence, and jump at the conclusion that this crazy guy, Barr (Sikora), should get the death penalty. But not Helen (Pike) who takes his case not to seek his atonement, but to make it possible for him to avoid the death penalty or maybe to annoy her DA of a father, Rodin (Jenkins). Barr doesn’t really deny anything, instead he asks to speak to some mysterious guy known as Jack Reacher (Cruise), who eventually shows up to take care of him not in the way Helen wanted.

However, once Reacher is involved, the pieces of corruption and conspiracy begin turning. Though predictable and slightly eyebrow-raising (Oyelowo’s character, HELLO!?), there really can’t be much wrong with it when you have Robert Duvall saying “Suck it!” in a movie. Jack Reacher is pure action of the best cheese of the 90s with a string of one-liners and some decent action scenes devoid of shaky cam, despite some of the flatness in photography, the picture quality rises above average due to its nighttime sequences.

Also, I’m uncertain of Rosamund Pike- even though I found Helen a little bit boring, I liked her despite turning into damsel in distress by the end of the film. There were at times that her wardrobe and the shots got a little too distracting (apparently her screencap is already well-documented [1][2]), but she matched Tom Cruise. I can’t picture either The Rock or Vin Diesel being matched to her, and with another actress, Jack Reacher would have been a completely different film.

Recommended for those who enjoyed Ghost Protocol. After all, Tom Cruise is Tom Cruise.