Lords of Salem, The 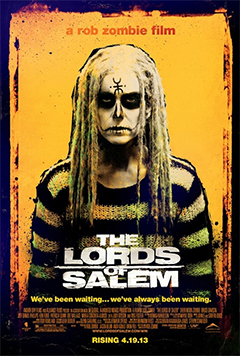 It seems after a double feature of disappointment with the Halloween remakes, Rob Zombie strikes another disappointing note with his latest horror The Lords of Salem.

After an intro that can only be described as Witches Gone Wild: Spring Break 1692, The Lords of Salem introduces the world to a recovering drug addict and radio DJ named Heidi, played by the director’s wife and recurring star Sheri Moon Zombie. To say that Sheri Moon looks bored out of her mind throughout the movie is a stretch, but it’s close enough to what the truth is as she moves from location to location never really giving a hint of being involved.

When a mysterious LP arrives at the radio station, Heidi plays the record and finds herself losing grip with reality. Each time she plays it again, whether at home or on the radio with her co-hosts, she finds herself falling deeper and deeper into a void of nightmares blending with reality. Coincidentally, she’s also pregnant with what could possibly be Satan’s spawn as signified by her nightmares, and the witches from the past seem to want to get their hands on that baby. It’s a familiar narrative and Zombie doesn’t do much to add to it.

Considering Zombie’s past in horror with his first two features, it’s all even more disappointing. Where The Devil’s Rejects is a stunningly violent callback to the seventies and House of 1000 Corpses is a heavily flawed b-horror inspired flick, The Lords of Salem tries to return to the surreal and supernatural past of horror. There’s a clear love for horror burning in his body, as signaled by the references to past horror films (The Invisible Man as one of the strangest) and classic cinema in general (the giant sized moon from Méliès’ A Trip to the Moon), some of which are interesting, but inevitably unnecessary to the mood or characters.

In an attempt to be a little more nightmarish than usual, Zombie tries desperately to grasp at the sort of qualities that make Stanley Kubrick’s The Shining such a memorable film, even though the story leads it to becoming a Rosemary’s Baby knock-off of sorts. Some of the women in the building even take a liking to Heidi and try “helping” her along, with Judy Geeson and Patricia Quinn giving the film some delightfully entertaining and much needed performances.

The lack of a real narrative is a big problem, but those surreal scenes actually make it a little interesting. With aspirations of being a mood piece rather than a story piece, it’s good to have something different and strange, and Zombie does that to a certain extent. The one and only moment in the film that really stands out and grabs the audience by the neck is a wild and crazed segment where Brandon Trost’s cinematography goes all out with color and lighting. It comes in the form of a grand finale where Zombie just gets as fucked up as he wants to with blood, sex, and music that is somehow more frustrating than the same horribly grating song from the mysterious LP that plays a thousand times in a the film.

Zombie also goes out on a limb with as much religious imagery as physically possible, and that’s not a good thing. There’s an abundance of churches, some naked women in masks hanging with a priest, some religious figures with masks masturbating, a potato-tentacle baby that looks like an Oogie Boogie rip-off, and even more fun for the whole family. At one point, Heidi walks into another apartment in her building and there is nothing but a pitch black room with a giant red neon cross that looks like a rejected cover for Arcade Fire’s Neon Bible. Nothing really happens there, but nothing really happens throughout every single remotely surreal scene in the movie up until the climax.

It is the lack of any real story and a desperate attempt at creating a surreal nightmare that makes The Lords of Salem a flop. There’s no real heart in this one like there was in something like The Devil’s Rejects, and as everyone knows, a few good scenes don’t make a good movie.