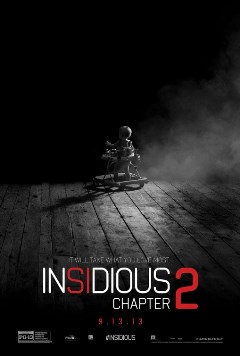 Warning: If you haven’t seen the first Insidious film yet, then you should view it because Insidious: Chapter 2 picks up right where the first film ended. But in case you start with Chapter 2, the opening minutes will spoil you on how Insidious ended at the expense of feeling confused and not getting the background on the franchise’s — yep, we’re getting a third film — horror gimmick.

For those who watched the first film, Insidious: Chapter 2 has the police investigating the causes of Elise Rainer’s (Shaye) death at the Lambert family’s house. However, the research ceases after they couldn’t find anything to determine who murdered her despite how she died and life goes back to normal for the Lamberts… not really. Renai Lambert (Byrne) figures out that their house is still haunted and something’s wrong with her husband Josh (Wilson), who seems oblivious to all the paranormal activity going on. This leads to Renai, Josh’s mom Lorraine (hershey) and Elise’s colleagues Specs (Whannell) and Tucker (Sampson) to contact retired psychic Carl (Coulter) in order to get answers. As you would expect from a film of this kind, the further the investigation goes on, things start to get worse for everyone thanks to a particular nasty spirit whose backstory is pretty twisted.

If you’re looking for scares and chills, Insidious: Chapter 2 delivers, even if hated a few sound-related scare tricks in it. But if you’re looking to see a sequel being better than the previous film or hoping that this film could be on the same level as James Wan’s previous film (The Conjuring), you will be disappointed. Don’t get me wrong, the film doesn’t blow: it’s fun to watch and it boasts good performances from Barbara Hershey, Patrick Wilson and Rose Byrne, who end up carrying the film for the most part and the females were the strongest here by a long shot. I actually liked seeing the supporting characters such as Dalton (Simpkins), Lorraine and the ghostbusters getting expanded roles this time given the spirit’s tactics of heckling everyone. Lin Shaye was great in her few minutes of screentime and Steve Coulter gelled well with the cast.

After watching The Conjuring, which was a surprisingly solid film whose success relied on its cast, smart screenplay and layering/plotting of the story along with maintaining its engaging atmosphere, I had hopes for this to somehow top or rival the first Insidious film. James Wan still works well as a film director just like he did in his previous two films and knows how to build the horror atmosphere. Chapter 2‘s shortcomings are due to an uneven screenplay, which made the storytelling feel heavy since many things were happening, certain things were overexplained by the characters and a few lines from certain characters felt redundant to hear and gave the film an overall tiresome feeling. I guess the overexplaining probably had to do with producers expecting audiences to check this one without seeing the first film — can’t blame them after Wan’s newfound success — but it didn’t worked that well for me at all. By the way, we also get to see a bit more humor content this time — mainly through Specs and Tucker — which lightens the tense and scary mood at times and were actually funny. However, there were a few moments in the film that shouldn’t make audiences laugh in these kind of films.

In spite of its screenplay’s flaws, Insidious: Chapter 2 gets a pretty good wrap-up (better than the one from the first film) and a interesting set-up for the upcoming third film, which will happen without James Wan on the directing seat, but Leigh Whannell continues as the screenwriter. I hope for the best and for the third film to put an end to the series, even if Chapter 2 could have worked as a series ending.