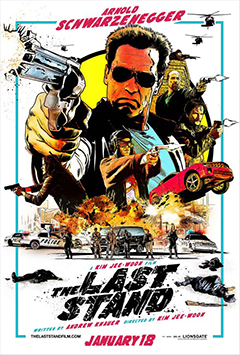 The first of three South Korean directors to make their American debuts this year, Kim Jee-woon hits with the most outrageous of them all: the action-packed comeback of Arnold Schwarzenegger.

The Last Stand takes place in the sleepy town of Summerton, where Sheriff Ray Owens (Schwarzenegger) has chosen to live after years of service to the LAPD. When a drug kingpin escapes from the FBI and plans his escape to Mexico, he and his crew cross paths with the sheriff who plans to bring him to justice.

One can walk in expecting one of two things. There’s the over the top John Woo style action flick we all dream of Kim Jee-woon making, and there’s the cheesy action comeback of Arnold that we wish could be better. The sad truth is that it’s a strange mixture of both, but it’s not an entirely bad thing. The big problem with The Last Stand is that it looks like it was put together by someone who saw a lot of choppy action movies in their life, but never actually made one. Now this would be fine if it were true, but editor Nam Na-young and director Kim Jee-woon made the wildly entertaining action movie The Good, The Bad, The Weird together, and this is a big step short of that.

Arnold is still playing the same sort of character we all expect him to play from his big action days, with plenty of cheesy humor laced into his dialogue. His best moments undeniably come in the film’s captivating final act, which is stuffed to the brim with car chases, shootouts, and wrestling. The supporting cast comes in all brands and styles, with Knoxville, Gusman, and a few of the townspeople providing the bulk of the comedy. It is an action film though, and it’s a shame it doesn’t play up the comedy more because this is a movie that had the potential to be a genius, over the top work of art.

Stylistically speaking, there’s little of the beauty that populates Jee-woon’s previous films, even if some of the silliness from his last action is still around. There’s nothing special about the look of it, which is a major disappointment, considering how gorgeous I Saw the Devil and The Good, The Bad, The Weird were on a much lower budget. One thing it does thankfully have is the fun-filled blood spatter from gunshots that one expects from something like this.

While a mediocre set up and messy editing don’t help The Last Stand much, its a nice little comeback for Schwarzenegger with a crazy final act that makes Kim Jee-woon’s American debut one worth watching.