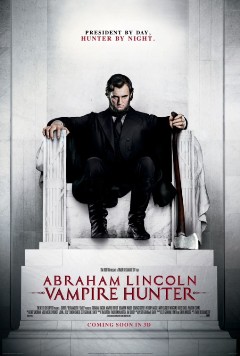 Honestly, I’m not fond of vampires today. Somehow, they are still undeniably popular thanks to current TV shows such as True Blood, The Vampire Diaries and Being Human. There’s also past works that put vampires in a good spotlight such as Interview with the Vampire, Buffy the Vampire Slayer (I still remember this show fondly along with Angel), and other stuff involving Dracula and others. And then there’s… fuck it, Twilight.

Anyways, Seth Grahame-Smith had the interesting idea of mashing up Abraham Lincoln’s life and vampires for his 2010 novel Abraham Lincoln: Vampire Hunter. As it happens with successful books lately, they end up being adapted into Hollywood films, and this one was no exception to the rule.

In the film adaptation of Abraham Lincoln: Vampire Hunter, we get to see Abraham Lincoln (Walker) not only working on his political career, but he also happens to be a vampire hunter. Trained by Henry Sturgess (Cooper), Lincoln moves to Springfield, Illinois and keeps on hunting vampires. He also marries the love of his life Mary (Winstead), becomes USA’s president and fights the Civil War to put an end to slavery as well as vampires, who are presented as the evils behind slavery.

While I don’t enjoy vampires today, I still decided to give this film a shot because of its interesting premise that connects Lincoln’s life with slaying vampires. Can’t deny that seeing Abe slaying vampires with an ax looks awesome. Unfortunately, the premise happens to be the best part of the film.

Despite its good visuals and some impressive action scenes — not much of a surprise considering Timur Bekmambetov directed Wanted, which featured cool-looking curved bullet shots — Abraham Lincoln: Vampire Hunter suffers heavily from presenting its story as way too serious, zapping most of what life and entertainment value the film could have had. I think that’s worse than its other problems, which include pacing issues, boring dialogue, editing issues, slow-motion overuse and casting Benjamin Walker as the lead character. While the supporting cast was decent (Mary Elizabeth Winstead and Anthony Mackie stand out nicely), Benjamin Walker fails to make the film engaging for the most part.

The most unsettling part about Abraham Lincoln: Vampire Hunter is that Seth Grahame-Smith serves as the screenwriter of his very own literature creation turned into film. I’ll admit to not reading the book yet (and the film doesn’t convince me to do it), but I still have to ask: how do you fuck up your own material? Seriously, this was worse than his screenwriting attempt with Dark Shadows.