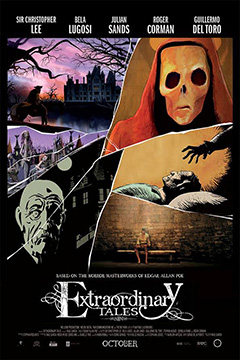 Extraordinary Tales, by award-winning Spanish animator Raul Garcia, was a treat. It was like Animatrix, except with amazing eerie stories by a dude obsessed with Death.

The film begins with a crow flying into a cemetery. The crow is, obviously, Poe (Hughes), and he begins a conversation with Death (Funke) about, well– Death, which is his obsession (according to her) and inspiration (according to him). We will see them discuss this and other things at length between the different stories. The animation in these segments looks like painted cardboard origami, I want some of these for myself. The dialogue between Poe and Death didn’t always work, though. Sometimes it was too in your face and lazy, but when it did work, it did pack a punch.

The first was the classic The Fall of the House of Usher, narrated by Sir Christopher Lee, whose voice elevates it, giving the segment the very ominous feel it needs. It’s the tale of an unnamed man who visits Roderick Usher, a friend whom he hasn’t seen in years, but asks for his help in illness. The other character is Madeline Usher, Roderick’s twin sister, who’s also ill. An unsettling story unravels, full of sickness (both of body and mind), faulty weather, and crumbling real state. The style used in here made me think of a computer animated marionettes inspired by Tim Burton films.

The second one is The Tell Tale Heart, with the voice of Bela Lugosi from old recordings, animated in high contrast black and white, inspired by Alberto Breccia’s artwork. It’s another tale told by an nameless narrator, who decided to kill this old man with a “vulture-eye.” We are not given the exact relationship between them, and we are not given a real reason for the murder. But boy, are we given quite the specifics about the murder and afterwards. I had forgotten how very histrionic Lugosi was– a bit over the top, but over the top was what it needed. I also remembered how much I love his accent.

The Facts in the Case of M. Valdemar, with the voice of by Julian Sands, was the third segment and maybe my favorite of the bunch because it spooked me the most. It was about a doctor putting his dying author friend into a mesmeric trance that suspends him between life and death for months, in the style of those old-time EC comic books from the 50s. It turned specially creepy during the final fate of M. Valdemar; just graphic enough to make it memorably scary, without scaring someone permanently- I hope. Also, one of the characters reminded me of Vincent Price!

The Pit and the Pendulum, narrated by Guillermo Del Toro, was the one story with a likable protagonist. It starts with a down-on-his-luck man brought to trial during the Spanish Inquisition. We don’t know what he did, but it sucks to be him as he’s thrown in an awful jail that features the titular pit and pendulum. If you have seen the Saw movies, you will see they were -at least- a bit inspired by this great story. The animation here was not as unique compared with the others, in fact, it reminded me of videogames cinematic, but it had a great use of shadow and light. I was pleasantly surprised by how good a narrator Del Toro was; he gave us all the despair, urgency, and fear the character was feeling.

The last one, The Masque of the Red Death, is the most beautiful (and a tad NSFW) of the bunch and the one without a narrator because it’s not told from anyone’s POV. Frankly, it doesn’t need it. Here we have Prince Prospero and a bunch of his rich noble friends attempting to avoid a dangerous plague known as the Red Death by hiding in his home. Nobody talks here but Prince Prospero, voiced adequately by Roger Corman. The happenings are self-explanatory and the moody music (thanks, Sergio de la Puente) is enough to help the mood. The animation here reminded me of an Egon Schiele painting. Red Death looked appropriately macabre, and the ending was as poetic as it was terrible.

All in all, Extraordinary Tales is a good anthology and something Edgar Allan Poe fans shouldn’t miss. I specially appreciate the narrators; all having deep roots related to horror films, whom -through their work- clearly love Poe. Now, I wish for a sequel with less known Poe stories.