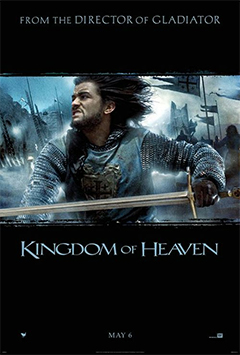 Set during the Crusades, Ridley Scott’s Kingdom of Heaven follows Balian, a blacksmith who is mourning over the loss of his family. It does not take long for this grief to consume him, leading him to commit a sin considered unforgivable: murder. Balian flees his village, only to join Godfrey of Ibelin on his road to Jerusalem, where Balian hopes that he may gain forgiveness for his sins. It is through Godfrey that his past is revealed, and Balian finds himself swept into a war for the Holy Land.

The collection of talented actors that fills Kingdom of Heaven is as impressive as can be. Surprisingly enough, Orlando Bloom isn’t half bad in the lead role. He’s not the ideal choice, but not too bad considering he was on screen for the majority of the film. The only real trouble with Bloom is that practically everyone in the supporting cast outshines him.

Edward Norton, whose face is hidden under a mask for the majority of his screen time, presents the most stunning performance of them all. Eyes, voice intonation, and body language can go very far and Norton proves it by emoting the hell out of his role from behind said mask. As for the rest of the cast, the two that deliver the most stand-out performances are Jeremy Irons and Eva Green, who embrace the writing for their characters like no one else.

For a three hour film it moves at a quick pace, much quicker than the eternally dragging Gladiator, though it sure does echo it more than once. This isn’t to say that it doesn’t lag at times, leaving one wishing there were a few more fight scenes to even out the first couple of hours, but not enough to warrant any major complaints.

One cannot deny just how excellent the technical aspects of this movie are, and you can’t even begin to imagine how much attention to detail there is in how a lot of the shots were set up. This doesn’t even begin to go into the set and costume design, which is frankly on another level. A mild abuse of blue and yellow color filters and some unnecessary slow-mo thrown in really diminishes the beauty of many scenes though, and it’s a shame that there weren’t more scenes that didn’t feature them.

The war sequences are outstanding and even more brutal and bloody than one might expect, rivaling and even triumphing over many in Gladiator. Out of all the technical work however, nothing is quite as masterful as the sound editing. Harry Gregson-Williams provides a score for the film that would likely not have been overlooked come awards season, had it not been for the unfortunate studio cut that most people were regretfully treated to.

Looking past some whitewashing that shouldn’t have happened with a movie on this grand a scale, the only major issue was that the line between “good” and “bad” was far too obvious. There should be much more moral dilemma at hand when religious war is tackled and this is something that the writing does not seem to take into account particularly well. There’s no subtlety needed in terms of religious symbolism for Kingdom of Heaven, allowing Scott free reign to express himself without criticism unlike in many of his other films.

Kingdom of Heaven is not nearly the underrated masterpiece that many consider it, but it’s nothing short of a great historical epic and easily one of the best depictions of the Crusades to date.