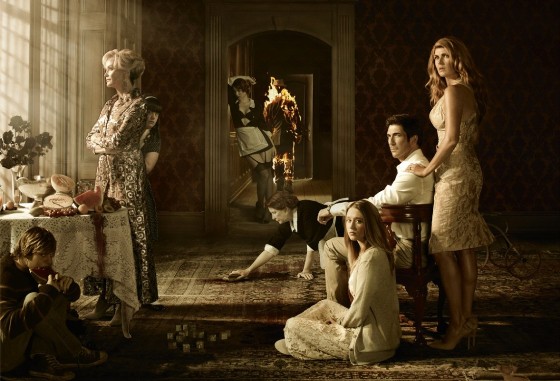 Due to its unconventional style, American Horror Story is definitely the kind of show that will get anyone talking about it — either positively or negatively.

The pilot episode introduces the Harmon family — therapist Ben (McDermott), wife Vivien (Britton) and daughter Violet (Taissa Farmiga) — as they begin to settle into their new home and attempt to fix their strained relationships. But suddenly, their lives start to become a living hell. Not only do they have to deal with living in a haunted house packed with plenty of ghosts, but the house itself worsens the relationships between the Harmons.

At its core, the first season of American Horror Story feels like watching a soap opera with strokes of horror, tipping its hat towards the likes of Rosemary’s Baby, The Amityville Horror, and The Shining. However, the storytelling for Season 1 is very bipolar. The show ends up being lots of things at the same time: great and shitty, predictable and unpredictable, scary, comical, intriguing, boring, cliché, kinky, etc.

The show’s cast is mostly solid. Up-and-coming actors Evan Peters and Taissa Farmiga are good to watch thanks to their performances as troubled murderous teenager Tate and the Harmon’s depressed daughter Violet, respectively. Farmiga had the greatest scene of the season regarding a very important revelation about Violet’s stay at the house and played it to perfection. Connie Britton is alright as Ben’s wife, but her best moments take place when Britton works with Frances Conroy, who plays old Moira (the housekeeper) with nuance. Alexandra Breckenridge plays up the kinky factor with ease as young Moira, who only Ben can see — the rest of us get to see old Moira.

As burn victim Larry, Denis O’Haire shines the most when he works alongside Jessica Lange, who makes Constance (the Harmon’s neighbor) deliciously evil to watch. Her overacting, campiness and cruelty come across as over-the-top yet restrained. Not only is Lange the best asset of American Horror Story, she’s the most amazing on the show, bringing out the best in everyone she interacts with. She is well-deserving of her Golden Globe nomination and should easily get an Emmy Award nomination.

Unfortunately, American Horror Story comes along with some big problems previously seen in other Ryan Murphy shows. First, the uneven writing present in Glee since its second season also affects American Horror Story. The writing team inserts many ghosts, which are more interesting than the Harmons thanks to their backstories. Second, the craziness and some of the “shock value” tactics used to scare the viewers are similar to Nip/Tuck in its best and worst moments.

Lastly, despite the house itself screwing the Harmons mentally, Dylan McDermott as Ben Harmon was pretty hard to watch. Not only was Ben heavily unlikeable and gets the Finn Hudson treatment, but he has to be one of the stupidest characters in the world for being a pyschiatrist. The only moment Ben is tolerable to watch is during the season finale; he’s an unintentional comedy act at best.

While it doesn’t boast the strong first season starts that Glee and Nip/Tuck had, American Horror Story achieves something Glee can’t do at the moment: it remains interesting to watch despite its flaws. I’d recommend watching the first season because of Jessica Lange’s performance alone. However, don’t get too attached to the characters because Season 2 will be an entirely different story.