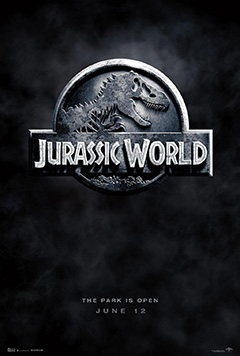 Mirella and I love dinosaurs to bits. What I’m not so fond of are C-grade monster movies, especially if they cost $150M USD to make. But alas, the paleolithic world beckons me, while the feeling of nostalgia engulfs my 3D glasses.

Jurassic World puts us right in the middle of the Animal-Kingdom-esque paleo-adventure park, 22 years after the Isla Nublar incident [1] — just like Lost World and JPIII never happened. If you wonder who in their right mind would actually open a park with real-life (and some genetically-modified) dinosaurs, well- that’s naive rich people. In this case, Indian multi-billionaire Simon Masrani (Irrfan), who vouched to Hammond (RIP, Richard Attenborough) he’ll spare no expense.

However, as audiences have grown accustomed to seeing T-Rexes and Mosasaurs eating bait, the park has seen the need to “launch” new species of dinos every couple of years. For their next corporate launch, one massive mother-effing hybrid known as Indominus Rex. But new products need testing, so park operation manager Claire (Howard) unwillingly seeks assistance from Velociraptor expert and trainer Owen (Pratt)… but things always go wrong in the park of insurance company hell.

In short, Jurassic World is all the first three movies mixed together into one. If you just love (not necessarily accurate) dinos and monsters, you’ll have a blast especially by the final creature confrontation. The beginning has some sort sense of wonder, which quickly turns into a Jurassic Park throwback, throwing memorabilia left and right with even mirror scenes. Though they try to play brothers Gray (Simpkins) and Zach (Robinson) like they were Lex and Tim, they really turned out to be a bit more like Kelly Malcolm, and with the hybrid dinosaurs and Claire screaming out loud in one of the scenes, it really took me back to Tea Leoni.

Visual effects are glossy, which I don’t necessarily agree with. It makes everything that’s not actually there pop out of the image, and that includes many of the gyrosphere scenes, and the once king shot of the T-Rex. Then it goes to the opposite extreme with the night vision Velociraptor hunt. That is director Colin Trevorrow letting his chaos roam, leaking into his screenplay and characters. Though Chris Pratt is touted as the hero of the film, it’s Bryce Dallas Howard’s journey from unattached corporate monkey to -somewhat- of a badass in heels. Ask Goldblum to lure a Rex wearing those, yeah, I don’t think so. Though, it did lack one-liners (the “I have a boyfriend.” line by Lauren Lapkus had the biggest reaction).

I suppose it does make sense that Claire would be wearing a power-suit for work… and not necessarily have a change of clothes, but do we really have to have an underlying love story that ends with a happily-ever-after? What is this some masala massy entertainer? I actually had little issues with Claire, but do we really need to have a man being the Alpha of an all-female pack of badass Velociraptors?

How brilliant is the Jurassic World park website though?