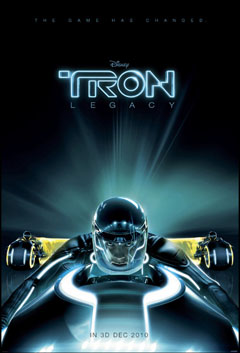 TRON: Legacy is, perhaps, the most awaited movie based on special effects. Let’s admit it, we were all more than a little impressed with the slick minimalist light blue on black graphics and Daft Punk’s involvement.

Let me warn you, that’s all you’re getting. It’s all fine and dandy if you tell me you’re in it for the graphics and that you were salivating the whole way through. But please, let’s not call this the BEST MOVIE EVER.

TRON: Legacy picks up pretty much right in the 80s, but that doesn’t matter if you didn’t watch TRON or just don’t remember what that was about except for the bikes, because we begin with some backstory. Kevin Flynn (Bridges in full-on young-smooth-face mode) is telling a goodnight story about the Grid to his little boy Sam. He promises he will show  him everything one day, but suddenly Kevin mysteriously disappears, leaving his multi-billion-dollar company floating, and abandoning Sam… who grows up to be a rich rebel without a cause.

The day his father’s company is about to unleash some new bulletproof operating system, a young Sam (now played by an un-charming Garret Hedlund) decides to sabotage the deal. While he gets reprimanded by his “late” father’s trusted friend, he is told that there’s been a message sent from Kevin’s old quarters, where Sam finds his old man’s secret offices.

I’m not really sure if it was an issue with the copy at the theater, but the print for the film was awfully dark in 3D, and while we could obviously see the neon blue, neon yellow, neon orange colors, a lot of the details seem to have been lost.

I wasn’t particularly impressed with the visual effects, per se, or the 3D use of the camera. However, TRON: Legacy has some of the best art direction I’ve seen this year. I mean, if Avatar won Art Direction at the Academy Awards last time, this one needs to at least get an easy nomination.

As for the story, acting and dialogue? Please, I couldn’t help myself from laughing at some of the corniness. The only one that seemed to really get it was Michael Sheen and his campy David Bowie Castor {plug}. Both Hedlund and Wilde — and I really like her on House M.D. — were okay at best.

Bridges was fine, but the smoothing on his face seemed really unnatural every time they showed more than half his face… especially with the wobbly head and the droopy eyes. If they smoothed his face, Bridges should’ve gotten a digital eye-lift.

And I swear to gawd, Olivia Wilde’s character really compared herself to Sam’s dog. Someone needs to address this.

One whole extra star because I liked the visuals.