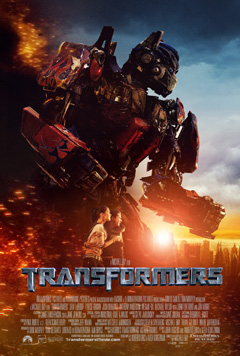 It’s been 4 years since Michael Bay (Armageddon, Pearl Harbor) unleashed Transformers into the theaters. I’m reviewing this film just before I watch Transformers: Dark of the Moon in a few days.

Based on the Hasbro toys, Transformers follows the battle between Autobots and Deceptions, with the Autobots leaded by Optimus Prime (voiced by Peter Cullen, Prime’s original voice actor) trying to prevent Decepticon leader Megatron (voiced by Hugo Weaving) from finding the All Spark and use it to destroy the Autobots and take over the universe. Megatron found the All Spark on Earth, but he crash-landed in the Arctic Circle and froze in the ice.

Meanwhile, teenager Sam Witwicky (LaBeouf) buys his first car on his birthday, unaware that the used 1976 Camaro he bought was an Autobot named Bumblebee who helps him win over his crush Mikaela (Fox). Little did Sam knew that he was being tracked down by the Decepticons after he intended to sell his great-great-grandfather’s glasses on eBay, which had information imprinted on it regarding the All Spark’s location. And soon enough, the Earth is caught in the middle of an intergalactic war between Autobots and Decepticons.

A few things Transformers has going against it relies in the fact that the main attractions [read: robots] take a backseat to the human storylines (we got Sam and Mikaela, the military people played by Josh Duhamel and Tyrese Gibson as well as the hackers played by Rachael Taylor and Anthony Anderson), the screenwriting is okay at best and some of the humor can be hit or miss for audiences. The most noticeable complaint diehard Transformers fans have mentioned is in regards to Megatron not transforming into a gun (he transforms into a jet instead). One of my friends said it best about this problem concerning Megatron.

Yeah, a jet. Yup. I feel like slapping someone. How hard would it be to let him remain a gun? Oh, I guess a gun would be “too violent for viewers”. Yeah, armies of mechs blasting the shit out of each other with laser cannons is family-friendly, but, as soon as one of those mechs turns into a gun, WOAH!! Give me a break.

And Michael Bay isn’t exactly a great film director by any means, yet Transformers is easily the best film he has ever done. We get amazing-looking robots along with a visually impressive film thanks to the special effects and CGI used here. Most of the humor employed in the film – despite being silly and dumb at times – works well and it’s not hard to distinguish the robots during their fighting scenes, which were well done. Acting-wise, it’s better than expected for an action film and Shia LaBeouf serves well as the lead character. However, the robots outshine the human characters by a long shot and that’s how it should be.

I’ll admit when I saw this for the first time, I had very low expectations and didn’t care much about the Transformers franchise. But the Transformers film ended up being surprisingly entertaining for an action flick and I found it a lot more enjoyable than Spider-Man 3 back in 2007. Too bad it was followed by a very pathetic sequel in the form of Revenge of the Fallen (my review seems kinder towards the sequel, but it’s one of the worst films from the past decade), which first memory I can recall are the bloody twin-bots.