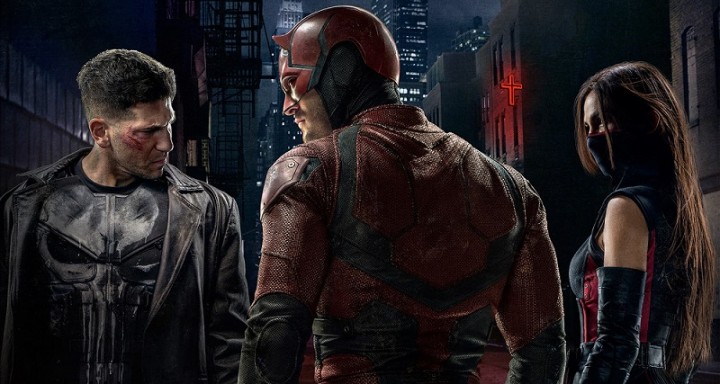 Note: This review considers that you have watched Daredevil Season 1 as well as Jessica Jones Season 1 because the latter’s season finale plays an important hand on one of the big two stories of Daredevil Season 2.

Season 2 starts off in a great note for Matt Murdock (Cox), as his law firm gained lots of momentum (and increased workload) after the Union Allied scandal case was dealt with successfully, along with the crime rate reduced thanks to Daredevil’s presence in Hell’s Kitchen. After Wilson Fisk (D’Onofrio) ends up serving time in jail, other crime gangs emerge to seize the opportunity available, but to no avail at the start thanks to Daredevil being the town’s savior. However, Matt’s actions from Season 1 has its consequences, which are revealed through the appearances of the menacing Frank Castle (Bernthal) and spoiled rich girl Elektra Natchios (Yung), both complicating Matt’s world in different ways.

Season 2 successfully retains its visual elements, dark mood, great casting, cinematography and fighting scenes that made Season 1 worth the watch. And despite Hell’s Kitchen being the main stage, Daredevil is the first Marvel/Netflix series to fully play on the MCU’s expansion card and really illustrate how the world is bigger by acknowledging the existence of other vigilantes through the appearances of Claire Temple (Dawson), lawyer Marci Stahl (Amy Ruthberg), and District Attorney Samantha Reyes (Michelle Hurd, reprising her character from Jessica Jones). While the appearances from the first two makes Foggy (Elden Henson) aware that Daredevil isn’t the only one taking down criminals, it’s Reyes who works as an antagonist of sorts against Matt’s law firm and Castle, whose brand of action serves as enough justification for the DA to ban vigilantes in the city while also catering to her own personal interests. Daredevil explores the risks of putting too much faith in either the police or vigilantism between the likes of Murdock, Castle, Reyes and Stick (Glenn), the latter who becomes a bigger deal midway through this season.

Let’s talk about the first big story and Season 2’s biggest highlight: Jon Bernthal as Frank Castle, who arrives first into Daredvil with guns blazing (literally) and steals the show thanks to Bernthal’s stellar performance as the former war hero whose world took a turn for the worst and he seeks revenge while also dealing with criminals in a very violent way that doesn’t bode well with Matt/Daredevil. Frank’s story is really compelling to watch thanks to its twists and turns that happens as well as his presence having an effect on every character he faces, directly or indirectly. My favorite scenes involving Frank Castle, aside from his gun-toting and fighting scenes, happen to be his interactions with Karen (Deborah Ann Woll), who is no longer just a secretary: she’s a headstrong character this time.

On the other hand, the other big story is headlined by Elektra deals with her return to Hell’s Kitchen and requires Matt’s help in order to hinder the activities of a gang of ninja assassins known as The Hand. Elektra’s presence makes Matt’s life complicated not only because he was already occupied with his lawyer and vigilante duties, but they used to be lovers before and had a thing or two in common despite their personalities being different. While Elodie Yung was okay as Elektra, she’s a less engaging female character to watch when compared to Karen — you could say both women work as different sides of a coin in terms of how they get along with Matt. And with the exception of two big key scenes regarding The Hand — spoiler: the giant ass hole and the achievement of resurrection — nearly everything involving them and their opponents was really tough to give a damn about, in contrast to Castle’s story getting juicier by the minute, in particular with the trial scenes. Elektra is a hit-and-miss character for me in several ways, but The Hand’s ark saps out momentum from Daredevil at times, and that’s not good at all. They don’t feel as threatening as say, HYDRA.

The Hand and Elektra aren’t the only weak spots in Season 2, as some of the dialogue bits feels a bit clunky — Season 1 suffered from it too, but its novelty factor and the cast’s great acting made you forget about it — the writing makes Matt look like a selfish jerk at times towards his friends. Season 2 also suffers from not having a truly compelling full-fledged antagonist since The Hand come across as ambiguously uninteresting for the most part while Fisk only pops up for a few episodes (which made sense) and Reyes feels more like an anti-Castle and anti-Foggy character. By the way, the season finale missed a big chance of introducing a big Daredevil antagonist because the way Elektra’s story played out wouldn’t allow said character to emerge — I still expect an appearance for Season 3, though.

Despite some more pronounced flaws this season, Daredevil is still pretty good to watch in terms of watching Marvel characters fleshed out and uses well the Netflix model of binge-watching episodes, especially with Castle’s story. The season finale not only makes me anticipate Season 3 a lot, but it also makes me look forward to the next season of Jessica Jones.