Transformers: Revenge of the Fallen 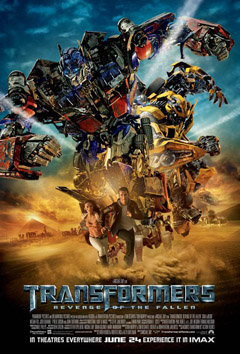 After the success of the first Transformers live action film and how great it turned out to be, I was really looking forward to seeing Transformers: Revenge of the Fallen on the big screen. I felt kinda decepticonned after watching it.

The movie is okay and the action sequences and special effects were great — anyone would expect that from this film, but the novelty factor wears off quickly since you already thought that the robots looked amazing the first time around.

The film felt less of an advertising spotfest than the first film, but it’s also riddled with some crappy dialogue, cringing moments, half-assed humor (most of the dick-related jokes weren’t that funny) and two very annoying autobot twins that could give Jar Jar Binks a run for his money. I know people would trash others for hating the twins because they sounded like they were voiced by black actors.

Well, Jazz from the first film had a black actor voicing him, but unlike the twins, Jazz was well done, entertaining and not annoying in general. Thankfully, the film picked up, in my opinion, after Sam escapes college after nearly getting killed.

I won’t deny that it is great to watch Revenge of the Fallen on the big screen due to the special effects, but I don’t know if I’d watch it again soon. Sure I’ll watch the third film when it comes, but I hope it doesn’t turn out to be worse than this.

Eh… wanna see a better film? Try Public Enemies or G.I. Joe. Even G-Force is better than this.